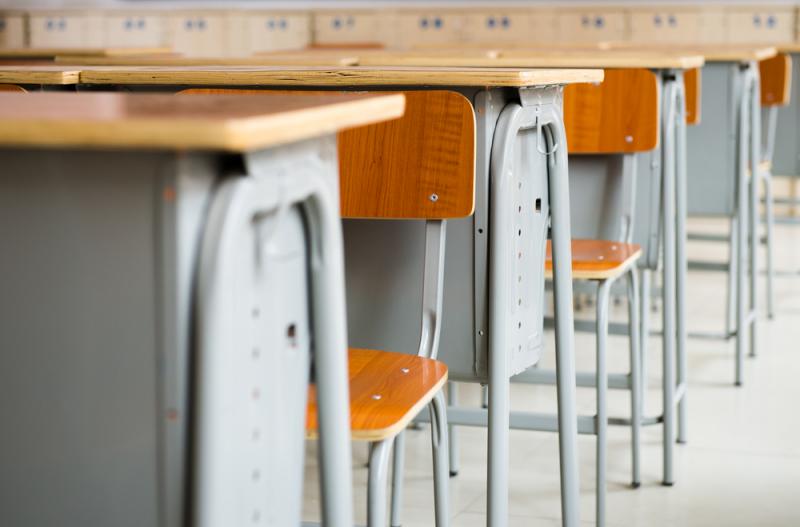 F. Scott Fitzgerald is quoted as saying “The test of a first-rate intelligence is the ability to hold two opposing ideas in mind at the same time and still retain the ability to function.”
To understand the performance of the contemporary U.S. education system, you must have one of Fitzgerald’s first-rate minds as data show two seemingly opposing facts.
Here they are as I see them:
I have spent the last year or so working with the U.S. Chamber of Commerce on Leaders and Laggards: A State-by-State Report Card on K–12 Educational Effectiveness, a compendium of information on the performance of American schools slated to come out on September 11th. One of the outcome measures we used were recently published scores on the 2013 NAEP, a national exam that has been given to a representative set of U.S. students since the 1970s.
If you look from the time of the last iteration of Leaders and Laggards, which used NAEP scores from 2005, you see clear improvement. In fact, every state in the country scored higher (when you average 4th and 8th grade math and reading proficiency rates) in 2013 than they did in 2005. If you take it back to the early 1990s, there are significant gains (particularly in Math). 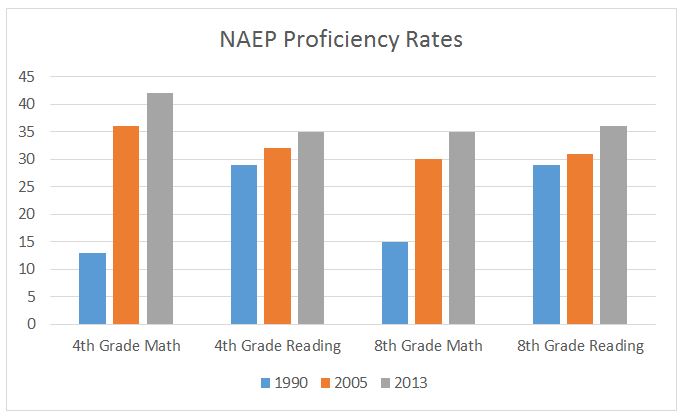 This is a good thing. States across the country have been working hard over the last two and a half decades to improve the outcomes of their children. While many decry standardized testing or charter schooling as destroying American public education, the data simply do not back that up.
But the optimism of those findings is tempered by the low absolute level of the scores. Sure, we’ve seen gains in math since the 1990s, but part of that is because in 1990 only 13 percent of 4th graders and 15 percent of 8th graders scored proficient.
So, let’s rescale that graph to highlight the fact that the best score is actually out of 100. 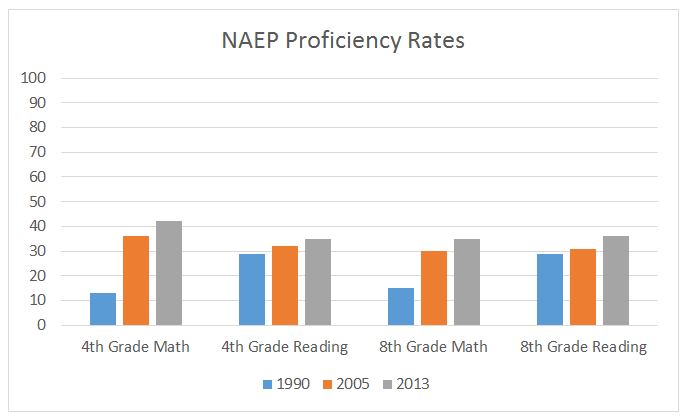 Doesn’t look so hot, does it?
What's more, these scores are not evenly distributed across the country. In 8th grade Math, for example, the top scoring state, Massachusetts, saw 54% of its students rated proficient. At the bottom, the District of Columbia saw only 19% of its students hitting the same bar.
Broken down by racial and socioeconomic group, it is even more troubling. In Alabama, where I got my start teaching, only 9% of African-American 8th graders scored proficient in reading and only 6% scored proficient in Math.
So we are getting better, it’s true. But we also have a long way to go.
Stay tuned, I’m going to pull out some more findings that may be of interest to you and post them here in the next couple of weeks!
Register for the Leaders & Laggards event on September 11th here.
ABOUT THE AUTHOR
Michael McShane is Research Fellow for Education Policy Studies at the American Enterprise Institute.
This post was originally published on the AEIdeas blog.
K-12 Education