U.S. Chamber of Commerce Foundation / 3 Reasons Why Household Creation is a Key Indicator of Economic Growth 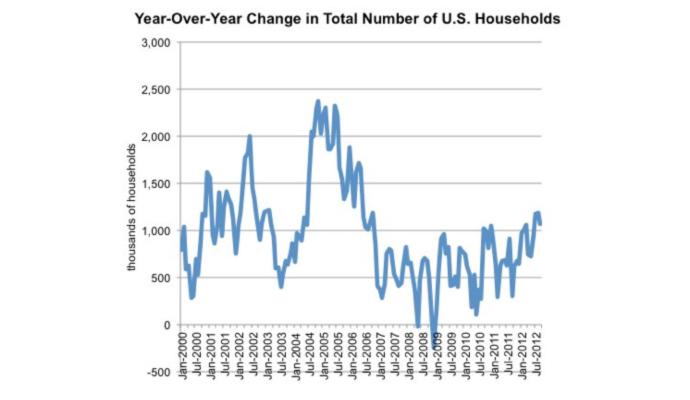 America is finally creating households again.  Why is this such a big deal?  Job creation begets household formation which generates economic expansion.  Moody’s Analytics estimates that each new household adds roughly $145,000 to output each year.  It’s clearly an important factor of economic growth.

Household formation is ultimately a key indicator of three things that are central to economies over the short and long term:

To get a sense of where we’ve come from, just know that household formation rates from 2007 to 2010 were two-thirds less than what they were a decade ago.  It strikes me as an achingly clear snapshot of the recession.  Here’s how Timothy Dunne of the Cleveland Fed described what happened:

“From 1997 to 2007, about 1.5 million households were formed on average each year in the United States. Then the Great Recession hit, and in the ensuing three years, the rate fell to 500,000 per year. This decline in household formation occurred even as the U.S. population was expanding at a rate of 2.7 million per year...”

Young people are the most likely group to be forming new households and the recession fell particularly hard on them.  Over the past few years, high school and college graduates have been living with mom and dad rather than setting up new digs.   Roughly three-quarters of the shortfall in household creation from 2007 to 2010 was made up of households led by young people ages 18–34.  Thirty-one percent of them are now living at home; of that group, 18% are unemployed.

Tighter lending standards have also put household formation in a bind, since they lead to higher borrowing costs.  Families have responded by taking more time to save for a down payment or build up their credit scores.  New home sales show this impact most clearly.  Even with a recent spike in sales, new home construction is only 37% of the way back to pre-recession levels.  Rental units have seen a dramatic rise in demand, on the other hand, especially among young people.

Finally, there’s what’s being called a “household gap.”  Demographic figures show that far more households should exist than there are now.  When Harvard researchers estimated future household creation from 2010 to 2020, they found that their projections had fallen a little over 6% from the year prior.  Most of that fall came from declines in immigration.  Between 2007 and 2009, the fall in foreign-born households under the age of 35 was 169 times greater than the decline in native-born households. Immigration is in turn the “key wildcard” in future household formation; according to the same Harvard study, “minorities will register an increase in the number of households in every five-year age group in the next decade.”  Catherine Rampell of The New York Times seems to think that recent job growth may be attracting more immigrants, but, as she admits, there’s little data to back this assertion up at the moment.

Young people have held off on getting married, starting families, and buying houses ever since the recession began.  Households are saving much more now than before the recession.  Population and immigration rates are due to continue rising.  All of these indicators point to a lot of latent demand for housing and household creation.  Mark Zandi of Moody’s Analytics predicts that “years’ worth of households that have been pent up will be unleashed in the next few years.”  We can hope that he’s right, with more than a little help from some much-needed reforms.

Childcare and Health and Safety are Top Two Reopening Issues, According to Employers
COVID-19 Impact on Childcare
COVID-19 Healthcare Coalition