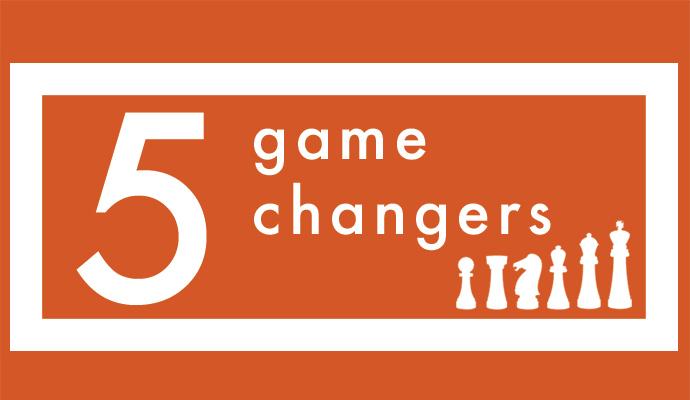 The McKinsey Global Institute (MGI) has released a study of America’s top five “game changers,” a must-read assessment of the factors that will likely drive renewed economic growth in the years to come.

In finding these factors, MGI focused on where we have a window of opportunity right now to make targeted investments in future growth. Getting there won’t be easy, but thanks to MGI’s work we have a much better idea of where the opportunities and challenges lie ahead.

One thing we have to keep in mind with these game changers is that they may not be as transformative as the breakthroughs of past generations. One reason is simple math. It’s easier to enjoy rapid economic growth when the economy is small and population just as reduced. As economist Robert Gordon has pointed out, to replicate the same sort of growth found in the Industrial Revolution, beginning in 1870, would require “innovations that are eight times as important as those we had before.” Shale energy may be making tremendous impacts going forward, but it will still be a relatively small part of an economy projected to have a GDP of $18.8 trillion in 2020. Indeed, MGI’s own GDP projections are actually lower than the Congressional Budget Office projections of $19.4 trillion. Are we simply moving from sluggish growth today to halfway decent growth tomorrow?

Let’s also remember that gamer changers are “needy,” requiring massive investment from the private sector. Government cannot deliver this future on a silver platter. In fact, government will either need to get out of the way or simply work to create an investment environment that isn’t stifling to the private sector. That is not the environment we’re in today. A whole range of policy changes will need to happen for these game changers to be realized, among them being an improved tax code that prioritizes investment and capital growth. MGI believes though that the significant amount of capital sitting on the sidelines today—$5 trillion in 2011 or a 12% ratio of capital to assets (compared to below 6% in the 1990s and years prior)—represents the largest potential to spur this future growth.

To get a real picture of transformative growth, we should look at this report together with another recent MGI study on “disruptive technologies.” The 12 technologies that MGI listed were estimated to have a potential economic impact of between $14 trillion and $33 trillion a year in 2025. Those aren’t direct additions to GDP, as MGI is careful to point out, but it isn’t hard to see how these disruptive technologies could compliment the hundreds of billions of dollars in GDP that the 5 game changers in this newer report are projected to add. Moreover, much of innovation that occurs today does so at the margins of disciplines and technologies, as our scholar, John Raidt, is apt to point out. What that means is that we should be even more interested in how these game changers and disrupters will impact each other than what they will directly contribute to the economy. Gains in one sector will spill over to the next, and so on, until you’ve achieved truly far-ranging and disruptive impacts. That’s the intent, at least.

The best illustration of the mutually reinforcing potential of future growth comes from the final game changer in MGI’s report: talent. Our esteemed former scholar, Nick Schulz, has pointed out that the stock of human capital in America is $738 trillion, compared to physical capital (what we most often look at when it comes to capital) at “only” $45 trillion. Investing in this human capital stock has some of the greatest returns of any of the game changes listed in McKinsey’s report. While talent has the potential to add up to $265 billion to GDP by 2020, an influx of better-educated students into the workforce could lift GDP by up to $1.7 trillion annually by 2030. A more skilled workforce reinforces all of the other game changers and helps enable the spread of disruptive technologies. As MGI concludes, “No other undertaking could be more vital to the competitiveness of the United States and the prosperity of its citizens.”

If anything, what the MGI report really calls for is a national competitiveness strategy. Not for the public sector to dictate terms, but for each and every decision of government to be judged according to what will actually enable (rather than hinder) a competitive advantage in the global economy. A competitiveness agenda would likely enable more public-private partnerships—not for cronyist ends, but for a more efficient, innovative, and accountable provision of essential public goods. This is a far stretch from today’s ad-hoc policy agenda and a regulatory state that seems to spend more time fearing the future than enabling its speedy arrival. We can and should hope for better in America. 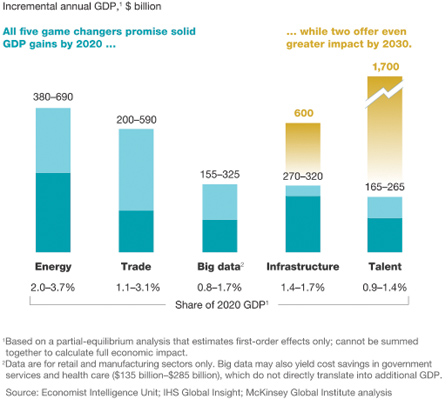