Are Professional Rites of Passages Changing Across Generations? 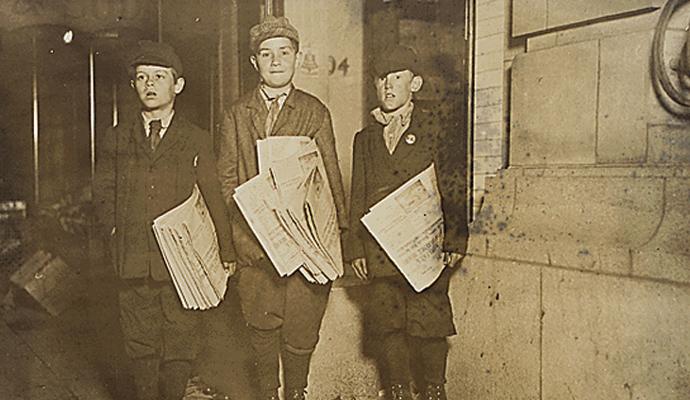 At our first dinner with the other Foundation Fellows & Scholars, a group icebreaker was held to discuss our first jobs. As the younger women in the group, something interesting jumped out at us: Every man over the age of 40 talked about being a neighborhood paperboy and what that role taught him about working.

One of the attendees was Bill Little, chairman of the U.S. Chamber of Commerce Foundation and also president and CEO of audio equipment manufacturer Quam-Nichols. Little started as a paperboy in Chicago. Beyond distributing newspapers, he learned multiple valuable skills as a young entrepreneur. He says, “You had your own little business at age 12. You had customers and had to serve them. You had to collect from them.”

As a rite of passage, Little felt that being a paperboy taught him important values about commitment and the value of work. He said, “You gained a focused sense of value. You knew exactly what went into earning those four dollars.” Preparation and duty mattered.

He went on to explain that “you could find yourself in pretty brutal weather with your wagon here in Chicago.” Little then added with a laugh, “I still wake up and feel a sense of alarm that I am late delivering the papers!”

First jobs are critical introductions to the world of work. They establish a person’s first experience of business, set expectations for responsibility and money, and reinforce values and a work ethic (or lack of) that the person will carry forward to every subsequent job.

Yet paperboys are rare choices today—and certainly not what we did as our first jobs. Tamara was a supermarket checkout girl, and Leslie stocked produce at a community farm stand.

Are the classic rites of passages, illustrated by Bill Little’s paper route, changing as members of Generation X take on more senior leadership roles from the Baby Boomers and as the Millennials move into the workforce?

We wanted to look into this phenomenon more, so we asked Alex Pang, a futurist and author of The Distraction Addiction, about what our society expects as professional rites of passage. Pang felt these rites provide external validation about a person’s identity to potential employees, colleagues, and peers. The rites mark a person’s passage from journeyman to master in a field. Certain professions like law or medicine require clear milestones, such as passing the bar exam or making firm partner, that show expertise and devotion to the field.

Pang pointed out that many societal rites of passage are important because they exist in limited quantity. For example, you only have one first child or aim to get married once. At a personal level, Pang immediately thought of the moment when his first book was published—with all its variations: in the trade press, in popular press, with a book agent, and so on—that allowed him to feel like a “bona fide writer” by adding “a new dimension in my professional life.”

Preston Cline, director of Wharton Leadership Ventures at the Wharton Leadership Program at the University of Pennsylvania, has studied rites of passage for troubled youth. He found that these rites are rooted in the community, not the individual. Cline said, “Only the community has the cultural power to make something sacred and powerful.”

When he looks at today’s youth, Cline sees that the experience of getting a personal mobile device, like an Apple iPhone, is becoming more symbolic. A cellphone allows each person to begin constructing a personal community and may then lead to a sacred process validated further by that person’s community. We certainly find parallels to getting a car for prior generations. Boomers may remember their first car as an extension of their personal identity, and certainly car-centric movies like “American Graffiti” capture that ethos.

In talking with three Millennial-aged women from Leslie’s Lean In circle, their experiences were less about the act of doing the job itself as it was for those in the Boomer generation. Instead, it was about what the employer was willing to invest in them and trust them with higher levels of responsibility that marked a rite of passage as a professional.

“Hands down, my first business trip. To have my company pay to bring me somewhere and pay expenses made me feel like a boss,” noted Lydia Wallbaum, account manager at Beutler Ink. She added that it felt like a passage because she was treated as “important enough to spend so much money on and worthy of the experience.”

Wallbaum’s colleague Sheri Cook, director of accounts at Beutler Ink, framed her rite of passage in terms of the level of responsibility she was given and had to take on, adding: “It was my first real client fire … that I had to put out on my own. There was no one to block and tackle for me, no one to blow on the boo-boo and band-aid the situation. It was just me, doing those things on my own for the first time, and reacting on gut instinct and implementing wherever I could the things I had learned from my peers.” Cook added, “Although it wasn’t an ideal situation, it taught me that honesty and genuineness are two things I will never approach any relationship without.”

Tracey Carl, an LA-based producer and content strategist, also pointed to battle-field responsibility as being the rite of passage: “When my boss—the president of the company—went on maternity leave I suddenly became the person her calls got sent to including sales, partnerships opportunities, and any questions on productions we were working on. Without having her (amazing) guidance easily accessible, I learned to really trust myself to make decisions. I also learned that sometimes simply presenting those decisions with confidence was equally as important of a skill.”

As the type of work that we do continues to evolve and better align with the needs of the global economy—and our own personal lives—we imagine that what constitutes a professional rite of passage, too, will evolve. What happens when workforces become more virtualized? Or when more men stay home than women? Or as the rising leaders within Generation X and Millennials redefine the nature of work and professionalism? The best way to understand what’s next is by being a part of it and by engaging others outside of your experience and generation. A great goal for 2014!