Big Data, Tear Down This Wall 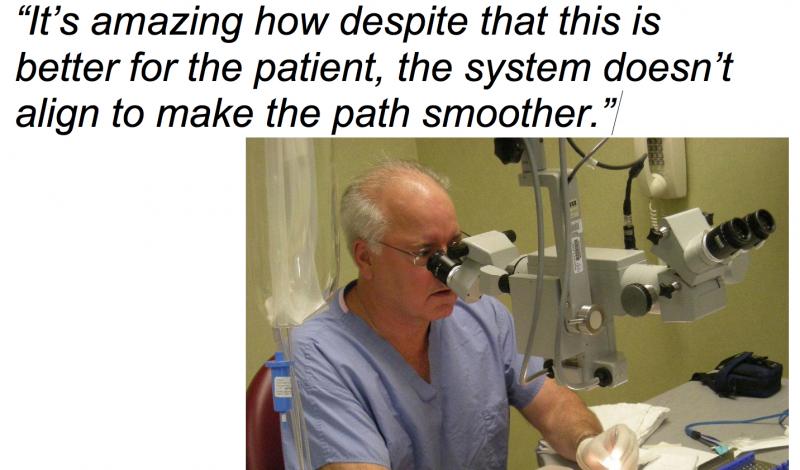 One of the great things about data-driven innovations is that they leave little room for subjectivity. They are borne of, and beholden to, data, and they thrive (or wither) based on the story the numbers tell. Disruptive innovations that challenge the status quo sometimes run into a brick wall of subjective resistance, but with data, that wall falls fast. This is being seen with one of the most exciting breakthroughs in medical technology.

As I wrote in a previous post, Focused Ultrasound (FUS) gives doctors the ability to affect tissue deep within the body without the scalpels, general anesthesia and significant risks that come with invasive surgery. Multiple ultrasound beams are focused on a specific point in the body, either to heat and kill targeted cells or to affect the mechanical properties of the cell membrane.

This innovative technology is still in its infancy, and there are clinical studies and research projects underway across the globe, investigating how FUS can be used to treat a range of illnesses and diseases. Yet, even as the early stage results are promising, there has been some resistance on the part of insurance companies and even doctors.

“When you work on a disruptive technology, you’re disrupting people,” says Susan Klees, Director of Communications for the Focused Ultrasound Foundation. “You’re disrupting how they make money and how they practice medicine. It’s amazing how despite that this is better for the patient, the system doesn’t align to make the path smoother.”

The answer to this institutional resistance is cold, hard facts. Data can reveal just how much this technology can do and how well it does it. Last year, University of Virginia neurosurgeon Jeffrey Elias presented the results of a stunning study at the American Association of Neurological Surgeons. Elias treated 15 patients exhibiting what is called Essential Tremor (ET).

ET causes a tremor of the hand and forearm, making it difficult to use that appendage. Dr. Elias used a FUS brain system to affect a region of the brain responsible for these tremors. After the procedure, every patient experienced improvement in their tremor. At one year, patients showed a 75% overall reduction in the hand tremor and an 85% improvement in scores for quality of life and daily disabilities. The results of this pilot study were so promising that a larger study is now underway to gain FDA approval for this FUS system to commercially treat ET.

While the study is progressing well, finding appropriate patients to participate in clinical trials is an enduring challenge for the pharmaceutical and medical device industries. Just 4% of cancer patients, for example, ever join a clinical trial, and up to 20% of all clinical trials never enroll a single patient. This makes it difficult to generate enough data to draw statistically relevant conclusions on a new treatment. For FUS, one approach to resolving this challenge is a new initiative from some unlikely allies.

Two of the primary companies manufacturing MRI-guided FUS technology are InSightec, an Israeli company, and the Netherlands-based Royal Philips Electronics. Each of these companies has developed a different FUS system, and they are generating troves of data on how their technologies perform. Someday, these companies may be direct competitors in the FUS space, but for now, they are collaborating to generate evidence that proves the technology’s value.

“This is a pre-competitive space,” says Jessica Foley, Scientific Director at the Focused Ultrasound Foundation. “There is more that needs to be done to prove that FUS is a viable alternative to current treatments, and until that point, there’s nowhere for [these companies] to compete.

To create a competitive space by advancing the technology’s use, InSightec, Philips and others are aggregating data from across the world, creating an international multi-center registry on FUS treatment of uterine fibroids, titled with the acronym RELIEF. The initiative’s principal investigator, Dr. Jaron Rabinovici, MD, who is the Vice Chairman of the Department of Obstetrics and Gynecology at Sheba Medical Center in Israel, said:

“Each year, there are thousands of women who could benefit from this low risk procedure, but who are currently forced to select a more invasive alternative out of concern that their insurer will not pay for the treatment. In today’s healthcare environment, payers have higher thresholds for novel technologies which can severely limit widespread acceptance and access. RELIEF should provide the data that will help payers to make their decisions.”

In looking at the many ways FUS is being studied, one striking point is that while in the United States the technology has only received FDA approval for a couple of treatments, in Europe, the technology has been cleared for use on a long list of illnesses and diseases. At a glance, it would appear that the FDA is dragging its heels; however, European regulatory agencies have a lower burden for proving efficacy, says Foley, and they are more focused on proving the safety of a new treatment. In the United States, the FDA weighs both safety and efficacy, which demands more and longer studies to gather the necessary data.

What is more, while FUS may have been approved for a range of treatments in Europe, insurance reimbursements remain a challenge, with only a few applications being covered by insurance companies. The same challenge exists in the United States. Indeed, regardless of regulatory approval, all nations studying FUS are effectively in the same boat. To advance the technology, the medical community needs data – to inform the patient about the option, to persuade the doctor to use it, and to prove to insurance companies that the treatment is effective and should be covered.

This story is far from over. At some point, the current snowball of data will grow into an avalanche. Doctors and researchers the world over are working together to see this new technology gain wider use and acceptance, and there is good reason to think – thanks to data – they will succeed in a big way.