Crowdsourcing As a Model of Abundance 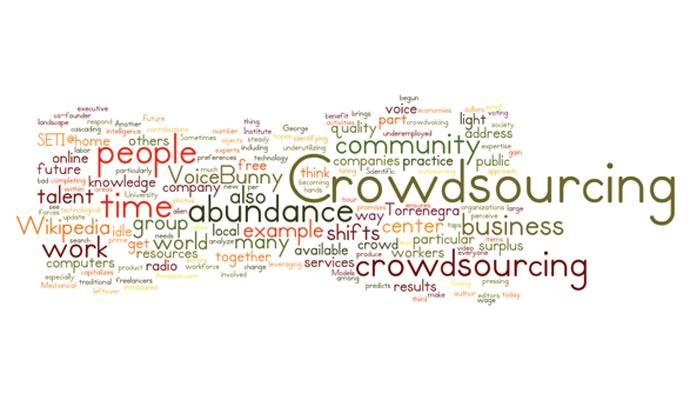 Models of abundance are becoming more commonplace in the business world, as today’s technological tools enable scale and outreach at significantly reduced cost. Crowdsourcing is a prime example.

Crowdsourcing is the practice of outsourcing work to an undefined group of people, especially an online community, instead of the traditional employees or suppliers. The practice has been applied to a range of business activities, including voting and fundraising.

Crowdsourcing assumes the old adage that “many hands make light work.” The approach brings a group of people together to address a particular issue that then produces a greater number and/or variety of results. Crowdsourcing reflects a belief that an abundance of input by a particular community will generate an abundance of quality output, benefiting everyone involved in the process.

Wikipedia relies heavily on crowdsourcing. Numerous volunteer contributions from the public continually produce and update Wikipedia’s online encyclopedia. Through Wikipedia’s efforts, knowledge has become more accessible, more democratized, and free to the public. By retaining a small team of editors for light quality control, Wikipedia also ensures that collective intelligence does not lead to cascading errors or misconceptions (either intentionally or inadvertently).

Sometimes too much of a bad thing leads to good results. Effective crowdsourcing practices have tapped into a steady abundance of idle time.

Grier introduced me to Alex Torrenegra, CEO and co-founder of Voice123 and VoiceBunny, two businesses that provide voice talent search and recording services for companies, casting directors, and others.

“VoiceBunny taps into the abundant free time of many,” says Torrenegra. He calls his company’s work “crowdvoicing” because it uses crowdsourcing to recruit voice talent. Through VoiceBunny, freelancers around the world record professional voiceovers for multiple applications, such as video games and radio promotions.

Another example is SETI@home, which capitalizes on people’s unused machine time. Started in 1999, SETI@home is a large-scale distributing computing effort with over 3 million users, whose idle computers download and analyze radio signals in the hopes of finding alien contact.

A third growing example is Amazon Mechanical Turk (MTurk), a crowdsourcing service from Amazon.com that lets programmers and others fill spare time by completing simple tasks that computers cannot, such as classifying product descriptions or identifying objects in photos. For the workers, it is more about the technical challenge than the money since the average wage works out to about a few dollars per hour, reports Scientific American magazine. For companies, the benefit is that they gain quick access to thousands of global workers on demand without hiring a large temporary workforce.

Some experts believe that our society is overproducing and underutilizing resources in many areas. Marina Gorbis, executive director of the Institute for the Future, feels that crowdsourcing surplus elements—such as leftover food or excess time among the underemployed—from one community and transferring them to another community can address pressing societal needs, plus create new business opportunities. She writes in her blog, “If we pulled together available resources at the local level, particularly leveraging surplus currently available within our organizations, we could do a lot to improve our local economies.”

The rise of crowdsourcing in recent years has begun to change the business landscape. Crowdsourcing also promises the value of harnessing abundance of talent and services in smarter ways.

David Alan Grier points out, “You not only get labor from the crowd; you also get a knowledge of the crowd.” Seeing which items people select, respond to, and complete provides information about the group and its preferences.

Going forward in 2013, Grier predicts: “I think we're going to see some of the mystery stripped away from crowdsourcing. And people are really beginning to understand it as part of the work of the future and part of the company of the future.”