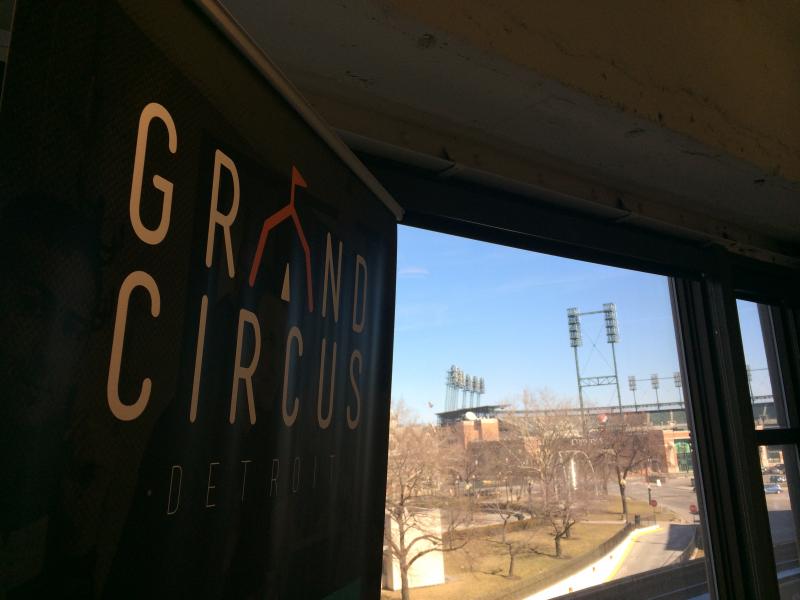 View of Comerica Park from the offices of Grand Circus in Detroit.

Detroit is not dead. Just spend a little time in the area around Greektown and Comerica Park, and you’ll sense that things are coming around. And that’s manifesting itself in an eager community of startups that is not afraid to think outside the box.

That’s the sense I got during the most recent Innovation That Matters Roundtable hosted by startup incubator 1776.

There is no use sugarcoating things: Detroit has a long road ahead. It’s one year removed from bankruptcy, and is still losing population. But trends in crime and unemployment are moving in the right direction, and there’s a level of optimism that we haven’t seen from the Motor City in a while.

I spent the day at Grand Circus, a co-working space on Woodward Avenue, I got a vibe not evident in other cities we've visited. There’s pride here, and a desire to build something important in a city that has been down on its luck for too long.

Detroit’s entrepreneurs are not here because of convenience, or even wealth of opportunity. They are here because they love Detroit, and that’s led to innovative thinking not always apparent in other places.

As one successful entrepreneur put it, “I didn’t get here by following the rules.”

People in Detroit—even those who might typically compete for funding or talent—are eager to support one another.

“If you want to build something here, people will rally to your cause,” one young tech CEO said.

No doubt, Detroit is tough to do business in. It’s still hard to keep and attract young people, many of whom have fled to the coasts. And there’s little history of startups making it big to serve as a catalyst.

But there is a desire on all fronts to make things work in Detroit, and with that spirit comes a unique open-mindedness. Some might call it innovation out of desperation, or a “why the heck not?” attitude.

During last week’s roundtable, I saw startups looking to collaborate when they might have ignored one another in other cities. I saw local and state government officials showing an eagerness to find solutions—and with a refreshing self-awareness of how a government can hinder as much as help.

Provincialism appeared to be non-existent, as those based in Detroit said they had no issue working with those from Ann Arbor or other parts of the state.

There’s also a refusal to dwell on Detroit’s struggles. Instead, startups would prefer to discuss the unique resources that Michigan has to offer: the engineering talent from the auto industry, for example, and access to one of the world’s largest supplies of fresh water.

Perhaps the most outside-the-box thinking came during a discussion of the city’s shortage of talented labor. Startups complained that technical talent was fleeing, leaving them struggling to find quality programmers and engineers.

The head of one investment fund suggested bringing in large numbers of immigrants to Detroit to stop the city’s population decline and boost the pool of talented workers. This was separate from supporting immigration reform, but a push for essentially an “open for business” sign to tens of thousands of people.

“We need to be inviting immigration,” this entrepreneur said. And remarkably, nearly everyone in attendance nodded in agreement.

Granted, there’s always fine line between innovation and insanity. That investor who’s willing to take a risk on a Detroit startup might be throwing money at a firm that’s undeserving. That government official who wants to help may actually just be getting in the way.

But Detroit is trying things. And when you throw stuff up against a wall, something just might stick.