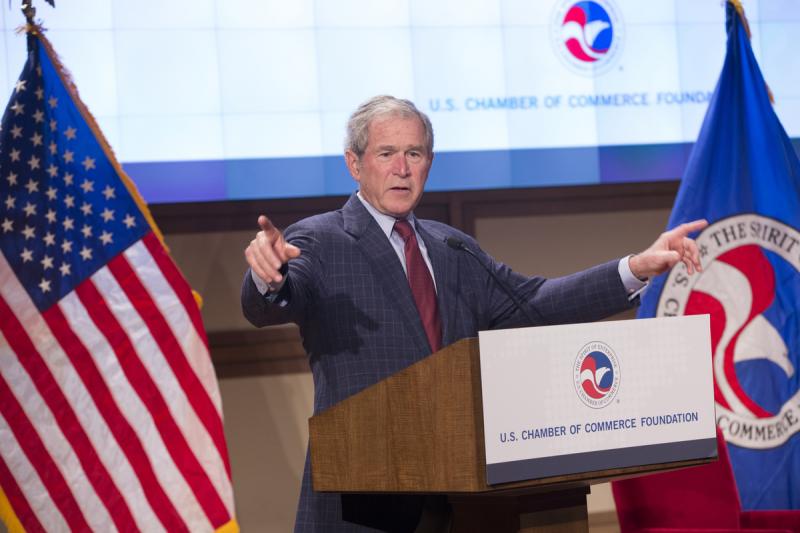 There's nothing like a surprise to get you started in the morning. Perhaps that's what President George W. Bush had in mind when he popped out from behind a stage curtain in Dallas this week.

The Chamber Foundation was visiting the Bush Institute to talk about North America's competitiveness. We felt this was an important topic getting too little air play. After all, so much of our trade, innovation, energy, and culture leap (or crawl) across the borders of Canada and Mexico everyday. And the president agreed, as did a host of notable business leaders who made the pilgrimage to the SMU campus on March 26th.

Sec. Margaret Spellings, the Bush Institute's president, first walked on stage to give welcoming remarks. Then the gasps came, as she mentioned a certain guest would be making an appearance. Sure enough, the former leader of the free world emerged.

The president spoke about a global vision of trade and cooperation -- and in this world, he said, North America plays a vital role. The region offers real opportunity to millions within its borders and billions more around the world. The United States can do much to help -- or hurt -- the spread of human flourishing. Our trade laws and global aid often make the difference between starvation and sustainability. The greatest example of this gain lies with North America, whose NAFTA free trade agreement laid the groundwork for much more cooperation.

Bush spoke of his younger years spent chasing the Mexican border, a line of squalor and thrill that's now leagues removed from today's manicured suburbia. Much has changed since freer trade came to town. And it isn't just the money. It's the sense that tomorrow will be better than today. That's a priceless gain. Every side of the North American border has felt the benefits that come from working together.

There's much more that could be said on President Bush's remarks, but that would come at the expense of the many other people who followed in his bootsteps. Such as Michael Graff of Air Liquide. He continued the conversation by talking about the importance of innovation to North America. He said that today's "energy renaissance gives us an opportunity to use our shared spirit of and commitment to innovation to spread opportunity across the continent." He's right. After all, "The threads of innovation connect our economies and culture."

North America is faced with both opportunity and challenge, he went on to say. This reality requires working together for preserving our role as an innovation leader. One example of this cooperation for growth can be found in energy.

Thanks to the shale energy revolution, America only imports 40% of its oil, and most of it from Canada and Mexico. The crude oil supply grew by 15% in 2013 -- the highest growth rate of any country in the world in two decades. Natural gas production growth over the past few decades has totaled over 200%.

North America, according to Graff, is at the forefront of the shale revolution. America specifically will be energy independent by 2020. This has all been made possible by innovation. And this all occurred faster than it took us to reach the moon.

Graff was actually ahead of the curve, since a panel led by the Chamber's Karen Harbert talked on much these same points. The shale gas revolution is about where those resources were found as much as the resources themselves. Low cost and abundant energy are driving growth and prosperity, making all of North America more secure. And when energy is abundant, it drives job creation and economic growth.

We can't rest on our laurels. America needs to ensure free-flowing oil and gas exports, for one thing. This will help drive further exploration and development in America. What about preparing our workforce for the jobs of tomorrow? That'll do too, starting with our children and installing a pride in hard work and skills development. The government can and should also promote education in the science, math, engineering, and mathematics (STEM) fields.

Most importantly, both Graff and Harbert's panel saw the need for creating a space for innovation to spread. Then reducing regulations and easing tax burdens will really make an impact.

Another panel tackled the supply chains that criss-cross North America's borders. They are the backbone of commerce. Yet again, they were enabled by freer trade across the border. Bombardier's Michael McAdoo mentioned how their latest Learjet would be impossible without North American cooperation. It is a NAFTA product born of a NAFTA supply chain.

One especially vital Bombardier plant is in northern Mexico. Why Mexico? It offers the correct level of cost with the right level of ability. It has an undoubted geographic advantage too as well as interest by the Mexican government to foster the right ecosystem for growth.

UPS sees this too. We also learned that the company adds to, stores, advances or completes supply chains for over 1 million customers every day. And just 22 packages delivered by UPS creates 1 new job -- every minute of every day.

Yet border delays maybe harming this flow. Delays crossing the Mexican border often total over 6 hours during rush hour. That's before you account for their weekend closings (which begs the question, does trade really take a weekend break?). To offer a point of comparison, crossing Canada means enduring a little over 1 hour in wait, even on busy days. There's clearly more room for growth.

Rich McClure, President of UniGroup and CEO of United Van Lines next stepped up to give his take on free enterprise today. And my fellow Americans, the state of our enterprise system is not good. McClure is worried about the attacks it endures day after day. Fair or not, business has clearly become a target. This cannot stand.

The question we should be asking, McClure believes, is what can we do to foster success? One thing we can do is tell the stories of free enterprise and how they impact real people, the ones so often shouted down amid policy fights. These are the faces of free enterprise. Each of us, McClure said, should be empowered to search the faces of those around us, to tell the stories of the hard-working men and women we know. The stories of earned success, once brought down to the level of people, help policymakers understand its importance.

What does this have to do with North America? A large portion of North America's economy is grown by small businesses, particularly in Mexico. These are folks who actually conduct trade or indirectly enjoy its fruit. On the flip side, they feel the burden of the $9 billion lost every to delays at border crossings. These are the small guys least able to afford it. This just goes to show that barriers to economic growth eventually roll downhill to everyday people.

We need to make it easy to move goods across borders. This is the end of the story for McClure.

We need to be bold and speak up for North American cooperation.  We need to advocate the cause of the global economy.  And we need to tell our stories.  Each of us can be the face of free enterprise in North America, a continent of unlimited opportunity for those who will have it.