U.S. Chamber of Commerce Foundation / Five Things You Need to Know About the Future of Public Engagement 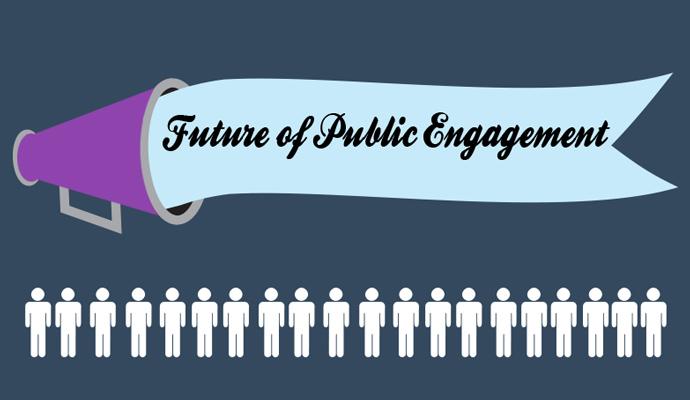 For the last millenium, the tactics of public engagement have largely remained the same. From the pamphlet to the radio to television, messaging was costly, and one-way. Or, with the most direct communication methods, such as telephones and public forums, they reached only a limited audience. It wasn’t until the dawn of the Internet, particularly social media, that new practices finally emerged—multimedia visual storytelling, targeting and engaging niche communities, leveraging best practices from brand marketing, gathering feedback through data, and the proliferation of platforms and devices.

The future of public engagement has arrived and here are the five things you need to know.

1) Multimedia Visual Storytelling is a Must

Foremost with these new practices is multimedia visual storytelling. Visual communication itself isn’t actually new—it’s perhaps the oldest of all practices discussed in this post—but it’s been reinvigorated as new technologies have made it more economical, easier to produce, and indispensable. Copy-heavy stories of the past lacked the attention-grabbing qualities and instant recognition needed to stand out in forums saturated with competing messages. The universality of visual language also helps when creating messages for a global audience. Videos, GIFs, infographics, and even photos attract the most focus in the new attention economy.

Take, for example, Look at Cook, an interactive data visualization website by Cook County, Illinois that tracks government expenditures and budgets. The project takes data normally found in spreadsheets and paper reports (that the majority of the public wouldn’t normally explore) and translates it into a graphically interesting and easy-to-understand visual story.

But big-budget interactive projects don’t need to be a part of every visual strategy. Depending on your story, utilizing a simple static image can be an effective device.

Perhaps one of the most important things to note about the future of public engagement is that it looks a whole lot like the future of consumer marketing. Everyone is now a content marketer, so taking cues from successful brand marketers (who have had a head start here) is a best practice in itself. The top brand strategies all have several things in common: their content is consistent and timely, it takes advantage of each platform’s strengths, and—this is a big one—it adds value to their audience’s lives. Content should be a free service. Whether it’s providing a laugh, useful information or advancing shared values, brands that don’t just focus on themselves and their message, but rather the interests and needs of their community find that their messages are readily absorbed (as opposed to being shoved down throats).

Another pro tip from the folks over in the marketing department: use experts! Utilizing known experts can add credibility to your cause, help its development and amplify its distribution.

The Future of Public Engagement from Leslie Bradshaw

Even wonderfully executed visual content can fall flat when directed at the wrong audience. Traditional media outlets such as newspapers, television, and radio reach wide audiences, but lack sophisticated targeting. With mainstream social media channels, reaching hyper-specific groups based on interests and beliefs is just a few clicks away. Additionally, every niche has a online home, a forum where that community already exists and can easily be engaged.

Of course, finding a niche audience isn’t the same as winning them over. Establishing authenticity over time is key to building lasting relationships with niche communities. Investing in the conversation will result in loyal advocates.

4) You Should Be Leveraging the Feedback Loop Data Provides

If you think that methods such as email blasts don’t work, let this sink in: the majority of the $690 million raised during President Barack Obama’s re-election campaign came through fundraising emails. The reason for the success is simple: the data feedback loop. Obama’s team experimented with everything from the donation amount they asked for, to their subject lines and even the email formatting to see what people were most responsive to. They were able to make slight variations based on the instant data they received from email recipients and then analyze the new results.

In the past, it was hard to track efforts and react to what was resonating in a timely manner. Today, we have real-time feedback in the form of link tracking, retweets, and one-click purchases. The time gap between re-evaluating strategy and trying again is becoming increasingly shorter. Of course, all this information can be overwhelming (I’ve discussed the importance and pitfalls of Big Data in another blog post), but picking just a few key metrics that match your objective (e.g., retweets are important to look at when trying to spread awareness) can make a huge strategic difference.

5) There is a Proliferation of Platforms and Devices

The final consideration in the future of public engagement is the primary vehicle used to engage: namely, the Internet. Currently, households in the U.S. have an average of nearly 6 Internet connected devices and the average American spends 3.2 hours a day on social networks. Rather than concentrating on just one effort (say, a television commercial), organizations are better served by creating content that’s agile, versatile, and can be scaled for repurposing across many online channels and devices. NASA, as an example, utilizes resources they already have (breathtaking photos, video, etc.) and has different content on each of it’s social channels—but crossposts the best of each.

While the social landscape changes constantly, it is worth examining the types of media spaces that exist: owned, earned, and paid. Owned includes social accounts and websites. This is where organizations have the most control, but with great power comes great responsibility. It’s important to utilize the the strengths of each channel while aligning, editing, and sticking to goals. Earned media is what happens when news outlets and the social universe pick up on the content you’re creating. While there is no recipe for going viral, creating content that works out of your context but still aligns with core goals and values is the best strategy. As every journalist knows, content needs a hook. Paid media—social media advertising and media buys—sets earned and owned media on fire. Use it where it makes the most sense.

In the end, thoughtful conversation, lots of listening and reaching people in the spaces they already traffic are the future of public engagement.