Industries That Will Define the 21st Century: New Fuels 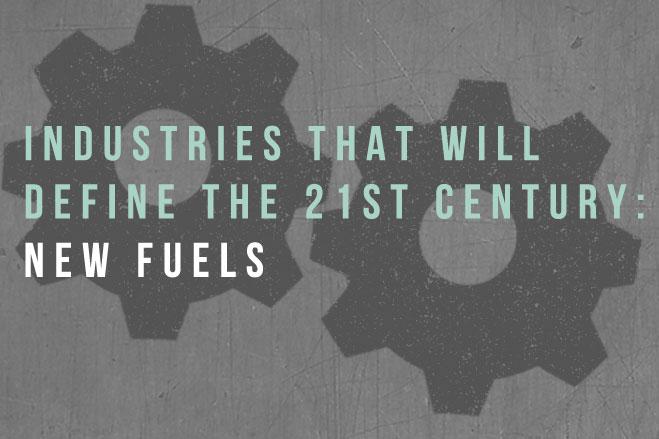 This is part 3 of a series looking at emerging industries.

Today’s emerging technologies let us peek at which applications and solutions will define business in the ensuing decades. Several nascent areas are particularly fascinating; in this post, we take a look at new fuels.

Energy is an area full of technologies both new and old. American industry requires energy to operate, much of which has historically relied on oil and natural gas. In 2011, oil and natural gas supplied 62% of the energy for the nation and will continue to play a leading role in the energy mix for decades to come. This is according to the latest State of American Energy report by the American Petroleum Institute.

Recent developments in fourth generation nuclear plants and renewable sources though are leading to a range of alternative technologies and applications. Biofuels, in particular, are renewing interest. By introducing new low carbon fuel regulations, California may help create a new market for low-carbon biofuels against other high-carbon fuels.

The top sources for biofuel have been corn, sugar cane, and soybean, yet other sources are being investigated. Researchers at Folium—a consortium that includes the Lawrence Berkeley National Laboratory, the University of California at Berkeley, and the University of Kentucky—has been working on an ARPA-E grant to develop genetically modified tobacco oil as a substitute for diesel fuel. Tobacco is easy to grow, has a large infrastructure already in place, and is abundantly available as a surplus product.

Older industries, such as those based around petroleum, will simply embrace more energy alternatives in order to stay competitive. Just 24 years ago, oil and gas company British Petroleum shortened its name to BP in an effort to broaden its mission and improve the company’s environmental image. Today BP has become one of the biggest generators of wind power in the United States.

These examples hint at the future to come. By looking at today’s inventions, we can begin to see what will define 21st century industry. As physicist Dennis Gabor famously said in 1963, “The future cannot be predicted, but futures can be invented.”