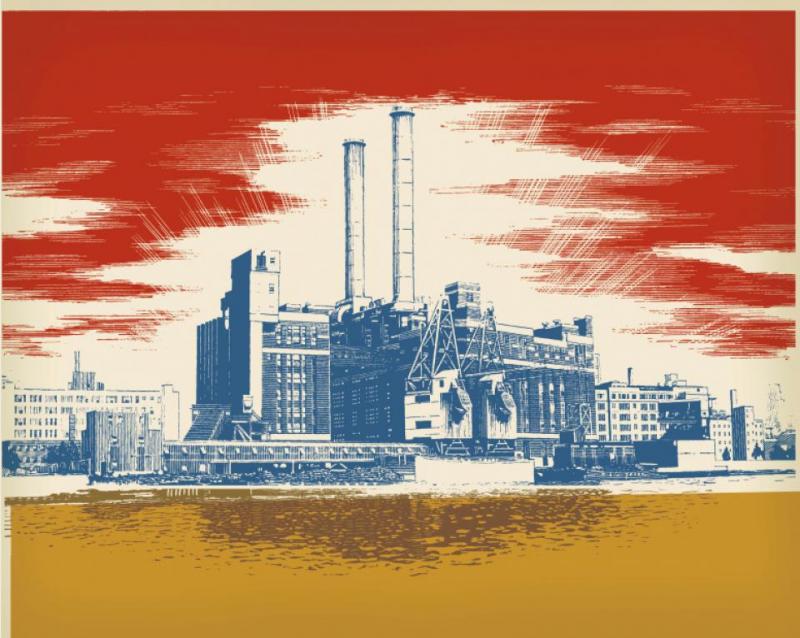 In Greenville, SC, a river runs through the past and the future of American manufacturing.  On one side stands run-down and rusting towers of bygone factories.  On the other side sit low-slung, long buildings churning out precision products for the likes of BMW and General Electric.  NPR's Adam Davidson visited this classic city late last year and came away with a story that rings true with NCF's recent work.  On May 17th, NCF will host a distinguished slate of thought leaders to discuss the future of American manufacturing.  What can we learn of manufacturing today, what do we want it to look like in the future, and how do we get there?  We invite anyone interested in the future of America's economy to join us.

Back to Adam's story, we find him in a bar chatting with old-timers about the factories that once defined Greenville.  Manufacturing was a triumphant sector, a booming source of jobs for the low- and middle-skilled.  Locals back then knew the value of education, but when faced with a job at a plant that paid far more than any skilled job could, why bother with the effort and cost of a college degree?  This era was not to last.  The heydays of the '50s descended into stagnation in the '70s, first slowly, then quickly falling further in the late '90s.

All while jobs disappeared and factories shuttered across America, manufacturing as a sector never truly disappeared.  It just got more efficient.  Manufactured products with low margins were now being produced in countries with similarly low costs, while products of high value that required a skilled hand to make were not really disappearing.  Jobs were lost, there is no doubt about that.  Yet, the actual GDP of manufacturing continued to rise throughout the doldrums of the '70s and '80s and well beyond.  America was still making things, but it looked far different than it did before.

When Adam walked into the Greenville plant of Standard Motor Products, he expected to see something out of the 19th century.  Grease under the fingernails, smoke-stained machines cranking out parts, and men in overalls herding products to completion.  Instead, he was bathed in the sterile white of what could have been a microprocessor plant.  Robots guided other machines to make parts so precisely honed that a virus could hardly pass through them once combined.

It was the people in this factory that really told the story of the future of American manufacturing.  Adam walked up to one worker, Madelyn “Maddie” Parlier, who stood in front of a machine stamping parts.  She wore a hairnet, lab coat, and protective gear.  With the push of a few buttons, her function was complete.  Maddie didn't need much in the way of education to do her job.  Explaining her work to a new hire took all of five minutes.  Take by way of contrast the plant manager, Tony Scalzitti.  Even the other skilled hires at the plant seemed to be in awe of the man.  He knew almost intuitively the precise temperature needed for a particular kind of aluminum to be made into a very specific part that goes into a car's fuel injector.  Years of education and training have allowed Tony to take the good, well-paying job that others once took for granted.  When Adam asked Tony whether he could be hired on to the plant, what with the classes in math and science that Adam had taken before becoming a journalist, Tony answered with an emphatic "no."  Adam would still need more than six months of intense training to actually be trusted with the plant's machinery, and even then Standard's managers couldn't be assured of his value.  A small, two-second mistake could cost Standard $25,000.

Here we see the divergence between the past and the future of manufacturing.  America will keep moving up the value chain of production and in so doing require a smaller subset of skilled workers at each plant.  As Adam observed in a follow-up cover article for The Atlantic, "Skilled workers now are required only to do what computers can’t do (at least not yet): use their human judgment."  Some jobs like the one Maddie has will stay at the interface between worker and machine.  Yet the competition for them is fierce.

Skilled positions on the other hand are barely getting filled, so great is the need and so limited is the supply.  Education will remain the single greatest need for American workers and the companies that hire them.  We should work hard at improving the system and support that supplies that know-how.

What Adam came away with from Greenville was a sense that the narratives of America's decline are off-key, to say the least.  Manufacturing is doing quite well and proving to be adaptable to the needs of the 21st century.  While unemployment is proving a tough nut to crack, skilled positions are being created and filled at a pace reminiscent of the 1990s boom.  On the opposite end of the skills spectrum where Maddie works, employment among workers without a high-school diploma actually increased by 126,000 last month.  It's in the middle skills that employment and manufacturing face their toughest hurdles.  Computer-aided productivity, as we saw at the Standard factory, may in time prove to be a solution among many.

What is true is that manufacturing looks different today than it did yesterday, and tomorrow still holds a brighter future that we must be prepared to meet.