NC With McCrory and Cawley.jpg 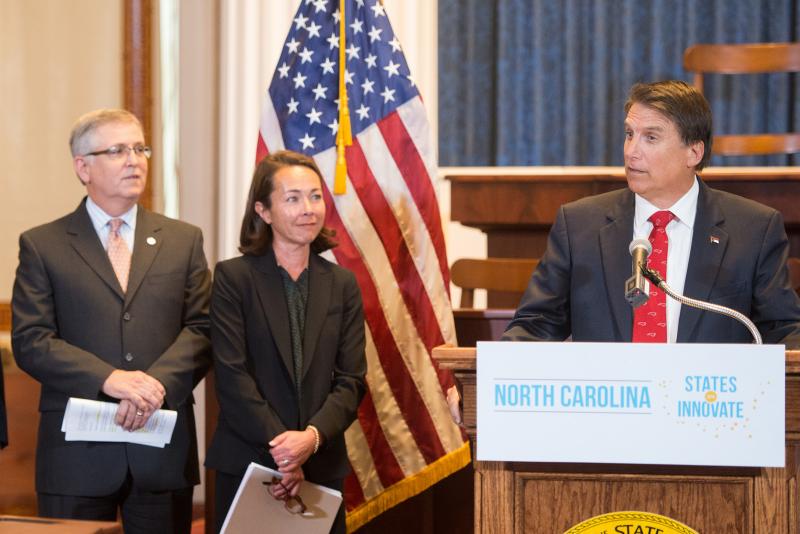 If you want to find a state that embraces innovation and high-tech job growth, North Carolina is a great place to start.

The Tar Heel state is named a top performer in the U.S. Chamber of Commerce Foundation’s recent States Innovate report, appearing in the top ten in two ke categories of economic performance.

Foundation leaders traveled to Raleigh, NC on Oct. 27 to tout these findings

“We’re here to highlight North Carolina’s accomplishments and share them nationally with other states,” said Carolyn Cawley, managing director of the U.S. Chamber of Commerce Foundation. “There are steps that states all across this nation can take to grow their economies and get a competitive edge.”

Where Does North Carolina Stack Up?

Cawley noted that the high-tech performance and innovation and entrepreneurship categories should be a point of emphasis for states looking to transform their economies for the 21st century.

“Those [categories] are where STEM education is paying off into STEM jobs, higher-paying jobs and better jobs for communities and families,” she said.

One key to North Carolina’s success is its ability to work with its strong base of colleges and universities. The state ranks in the top five in the nation in academic research intensity, according to the States Innovate report.

North Carolina launched an Innovation-to-Jobs program in 2014 that has brought together key stakeholders seeking to find ways to commercialize academic research. This resulted in the creation of grant programs and tens of millions of dollars into a venture multiplier fund.

While Silicon Valley remains the leader in developing technology startups, the high cost of living there has allowed placed like North Carolina to attract and keep top talent.

“One of the things we’ve found in this study is the migration of those jobs, and talents and aspirations to places like North Carolina,” Cawley said.

“No Time to Spike the Ball”

The Enterprising States report is an attempt to recognize those states that are putting in place the right policies for growth, but also to challenge states to strive for improvement.

North Carolina officials said they would like to continue to move up in the rankings.

“This is no time to spike the ball , because the competition  is tough,” McCrory said. “And there are other categories we want to be in the top ten in.”

To read the States Innovate report, go to www.enterprisingstates.com. Also check out social media highlights from the visit to Raleigh.