U.S. Chamber of Commerce Foundation / Is This Printer a Thief? – 3D Printing and the Impact on Intellectual Property

Is This Printer a Thief? – 3D Printing and the Impact on Intellectual Property 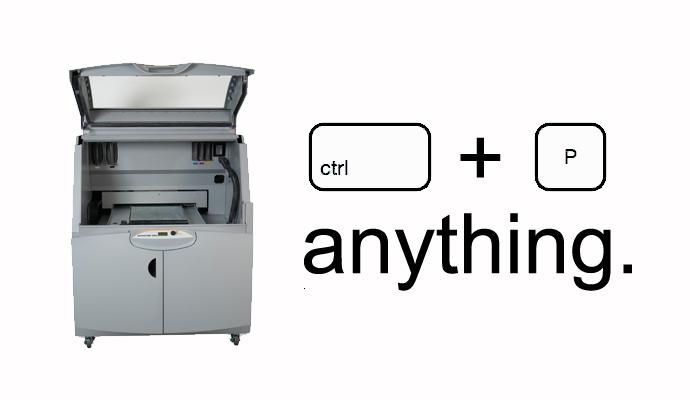 Out of a string of zeros and ones, 3D printers are able to conjure physical objects on demand. These innovative machines can transform manufacturing in America, but is our intellectual property (IP) system ready for this change?

Additive manufacturing (the process that involves 3D printers) works by continually applying layers of base materials and adhesive until a finished product emerges. You’re more likely to see a 3D printer make parts for a clock rather than a complete clock, for instance, but that is changing. Constant innovation has increased the capability of these machines and brought their price point down. It costs roughly $1,000 for a basic home model or $15,000 for an industrial version, making them more cost-effective for practical use. Just a few years ago, these same printers would have cost somewhere in the 5 to 6-figure range.

The technology behind 3D printing is advancing so quickly that we must begin to wrestle with its implications. For one thing, these printers represent the possibility of a large paradigm shift in manufacturing. They minimize the large capital and material investments that marked the assembly lines of the Industrial Revolution, while allowing for a quick response to market demand without needing to hold large stocks of inventory. As The Economist puts it, “Success in manufacturing will depend less on scale and more on the quality of ideas,” which potentially lowers risk for established companies as well as the barriers to entry for new firms. 3D printers are already in wide use for the rapid prototyping of designs, and as costs decrease, it will quickly become a means for product production too.

Second, physical objects can now be copied and shared over the Internet. You can scan a plastic toy, for instance, upload the resulting file onto a file-sharing website, and have someone else download the blueprint for a desktop 3D printer to use in recreating it. In time, we will be able to do the same with much more valuable products. Indeed, 3D printers can excel at reproducing intricate, interwoven parts. Today, we may copy a toy; tomorrow, a guitar fit for the Rolling Stones.

The implications for intellectual property quickly become clear. Only products in the public domain can truly be copied and shared. While the past few years have seen a tremendous fight be waged over the sharing of copyrighted music or TV shows, we may soon see the battleground shift to the sharing of physical objects. Copyrighted designs and patented inventions will quickly become easier to replicate (and more valuable to pirate).

In the patent world, to print a complex object means considering the rights given to numerous manufacturers of each essential part. 3D printing operates in a world that doesn’t dwell on the sourcing of individual pieces, since its production is bound together from the start. The copying of physical objects in the digital realm is not something that current law appears prepared to handle, and thus where the real discussion over “IP in 3D” will take place.

Here is how three experts in the UK— Simon Bradshaw, Adrian Bowyer, and Patrick Haufe—summarize where we stand in the context of 3D printing at home, since that’s where they believe the legal discussions may first arise:

“Hitherto a technology limited to the production within industry of models or prototypes, 3D printing is, like the computer in the 1970s, becoming available to the domestic enthusiast. Like the home computer, personal 3D printing has the potential to radically change aspects of the way in which we live; we can even envisage a society where home manufacturing of many items is the norm. However, as with home computers, such developments may have wider effects. The convergence of the Internet, digitized music, and media players has had dramatic consequences for music copyright. 3D printing technology may have similar implications for artistic copyright, design right, trademarks, and patents, but in a rather more diverse legal framework.”

Unfortunately, few experts are taking the time to see how prepared the IP system is for 3D printing. And that statement applies to America as much as anywhere else in the world. As Bradshaw and his co-authors go on to say:

“Such questions have received surprisingly little attention. A comprehensive literature search for legal references to ‘3D printing’, ‘rapid prototyping’ or related terms found few matches; one referred to the copyright in 3D printing reconstructions of archaeological finds whilst another briefly noted 3D printing as facilitating the overseas manufacture of patented products. Even searching within 3D printing engineering journals found only one article considering the prospect of widespread Internet-enabled dissemination of design files, whilst the sole relevant UK case report concerned ownership of copyright in commissioned models; their production by 3D printing was entirely incidental.”

Any disruptive innovation will bring with it a slew of unique challenges. The hardest part of bringing 3D printing into mainstream manufacturing will be to elucidate a legal framework that limits theft while not impinging on innovation. It will be a few more years before 3D printers seem in any way ubiquitous, so there is still time to wrestle with the IP implications of this tremendous technology. Innovation doesn’t tend to linger though, and neither should our discussion on this important topic.