Smithsonian Looks to 'Reboot the Suit' from First Moon Landing 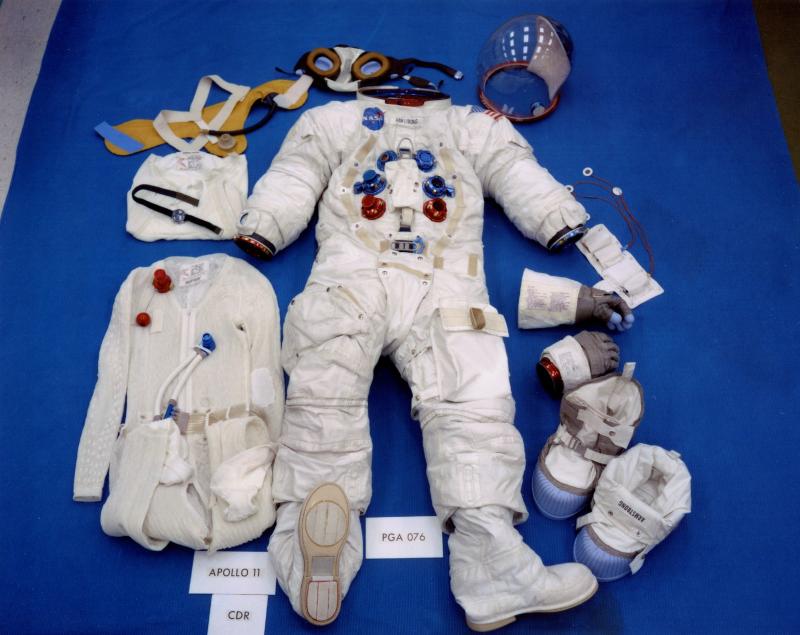 Apollo 11 space suit worn by Neil Armstrong on his voyage to the moon.

Tweet Facebook
The Smithsonian is using Kickstarter to raise funds to preserve the suit worn by astronaut Neil Armstrong in 1969.

The Smithsonian has long been the keeper of America’s most famous artifacts. From the flag that flew over Baltimore’s Fort McHenry that inspired Francis Scott Key to pen the poem that became our national anthem, to the more culturally reflective items such as Judy Garland’s ruby slippers from the Wizard of Oz and Archie Bunker’s chair from the “All in the Family” TV series.

Regardless of your interest, there is a Smithsonian museum with a treasure trove of artifacts and history just waiting for you to explore. Taking care of those items, however, is not without cost. Maintaining physical space to store the items, as well as preserving them so they can be shared with future generations, is always a challenge. While the Smithsonian receives an annual appropriation from Congress, those funds only go so far. As such, the museum looks to other donors, including corporations and the general public, to support their preservation efforts.

Which is why it seems appropriate that the Smithsonian is taking not just a “small step” but indeed a “giant leap” by engaging Kickstarter to preserve one of our nation’s most revered outfits—Neil Armstrong’s space suit from the Apollo 11 mission to the moon.

The “Reboot the Suit” effort is a first for the Smithsonian, and per their newly released website for the project, they want to reach as wide an audience as possible.

While Kickstarter has been used to fund startups, movies, TV shows, art projects, publishing efforts and just about everything else you can imagine, this type of dynamic funding tool presents a huge opportunity for the Smithsonian. They are inviting the public to be a direct participant in preserving one of the world’s most unique items – as well as one of its most fragile. While the moon suit may have protected Neil Armstrong from the hostile environment of space and lunar surface 46 years ago, time and our own atmosphere can be unforgiving to the fabrics that he wore.

For years, the Smithsonian has been proactive in preserving Armstrong’s suit and those of the other eleven American astronauts who boldly went where no one had gone before. With the 50th anniversary of our first moon landing now just 3 years away, the Smithsonian is doing what it can to preserve the suit so it can be put on public display where we can all enjoy it. That means it’s going to take more than congressional appropriations to foot the bill.

In a time when public funding is stretched thin and held up by the endless bickering of legislators, the ever-adaptive private sector is empowering all organizations to get things done. Kickstarter, GoFundMe and other crowd-funding organizations give any group the chance to solicit public interest and secure the resources to do something new, something risky and something important. The private sector can do faster, cheaper and more efficiently what public organizations cannot. Entrepreneurs and startups have known this for years, and now it seems the Smithsonian understands that too.

While a Kickstarter campaign will certainly raise plenty of questions and criticisms about how much money the Smithsonian gets and how its funds do not cover this type of preservation expense, it shows the institution is more than willing to be creative and forward-leaning to fill the funding gap. Rather than rely on the conventional fundraising outreach to an aerospace corporation or some other company, getting the public involved allows greater public ownership and connection to one of this nation’s (and humanity’s) crowing exploration achievements.

As a people, we take great pride in the imagery of our nation’s flag going where it has never gone before – be it the moon or on the New Horizon’s spacecraft as it passes Pluto to go further “out there.”

With any luck, the Smithsonian will reach its $500,000 goal, and while preserving Neil’s suit, they’ll have enough other funds to preserve Buzz Aldrin’s and the other moonwalker suits as well. Those are items we as a nation need to preserve and share, and Kickstarter may be tool that saves them all.