U.S. Chamber of Commerce Foundation / These Are the Droids You’re Looking For … at SxSW
General Foundation
March 20, 2015

These Are the Droids You’re Looking For … at SxSW 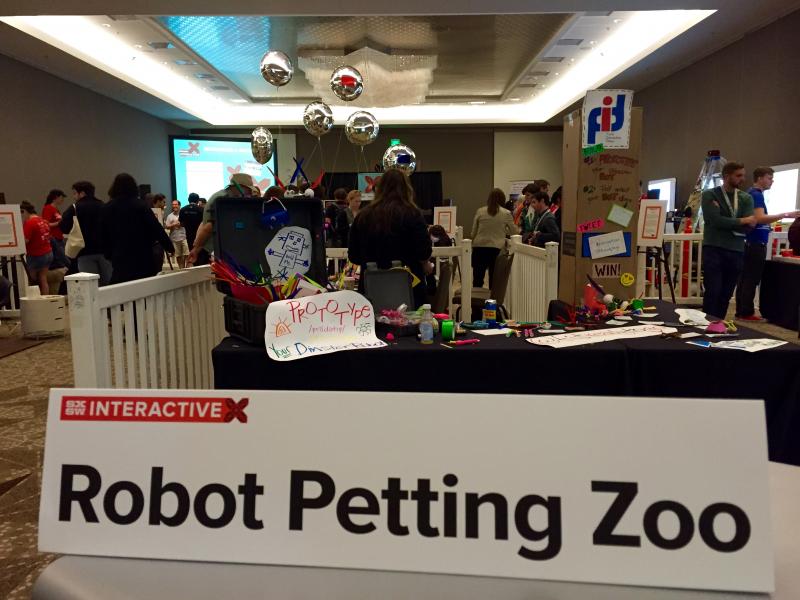 AUSTIN, TX— SxSW is already a zoo, so it was appropriate that on the fourth-floor of the J.W. Marriott in downtown Austin there’d be a room devoted to a “Robot Petting Zoo.”

One of the standout robots was perhaps the simplest. Ozobot is a game piece with brains, allowing kids to program its actions using simple colored lines. Sequences of black, blue, red, and green lines command the robot to stop, turn, or make random decisions. Ozobot teaches kids how to think like a programmer. The purring little bots even instill empathy. Jodi Mixon, an education specialist with Ozobot, described how kids from war-torn countries grew emotionally by interacting with their robots, and how the startup is now working with autistic kids to do the same.

MUPPette, the world’s first 3D-printing drone, can autonomously build cement-like structures in remote areas. The drone’s makers, a team of three designers from an LA-based company called Gensler, admit that it’s a work in progress. Nevertheless, through constant iteration and crowdsourcing, MUPPette has made great strides in a short time. In due course, MUPPette may very well be able to build entire shelters for people who’ve lost their homes.

BlabDroid is the exact opposite of the Terminator. Made of less than a foot high of cardboard, with bulldozer wheels and a smile on its face, this robot defines cute. Yet BlabDroid’s goal is rather more serious: practicing the Eliza Effect, which posits that people may open up more willingly to machines, particularly ones that appear vulnerable and more open to control. BlabDroid may help psychologists in communicating with survivors of traumatic situations, or documentary filmmakers to reveal more of our humanity.