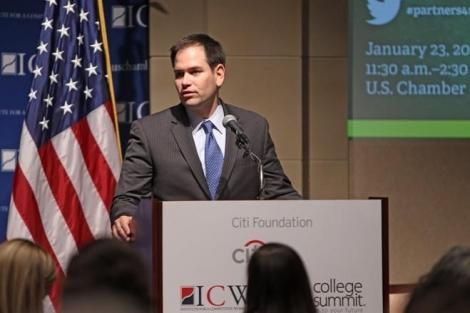 Addressing the nation’s skills gap is “not getting the attention it deserves and needs” because it’s not a partisan or controversial issue, says Sen. Marco Rubio (R-FL).

Creating new middle-class jobs and equipping Americans with the skills to fill those jobs should be top issues at the state, local and federal level, including education and immigration reform, Rubio says. “A vibrant and broad middle class…is a distinguishing characteristic or our nation,” he said at a January 23 event at the U.S. Chamber, “but it’s gotten harder to achieve.”

The path to the middle class has changed, in part because of industries going obsolete or being replaced by other industries, Rubio says. That’s why it’s critical to retrain workers for new jobs.

The makeup of students is changing as well, Rubio noted. Today’s students may be laid off workers seeking a second career, or even returning veterans.

Rubio called on state and local governments to help remove the stigma of career education. He pointed to a Miami auto dealership that trains high school students to become BMW mechanics. When they graduate from high school, these students are ready to begin a job that pays $38,000 a year. “Not bad for an 18-year-old,” Rubio said. He also called for more advanced placement classes and school choice for students with special needs.

On the federal level, Rubio called for changes to the student financial aid program to better embrace innovative learning environments. He criticized the current system, which only provides financing for classes offered by accredited universities, and pointed out that many students take classes online, where financial aid is currently not available for use. “This discriminates against online course work,” Rubio says.

He also suggested a financial loan education initiative to help students weigh the cost-benefit analysis of getting a particular degree versus what they’ll earn with that degree.

Business has a large role to play in improving education and the workforce, Rubio said, including communicating with colleges and high schools on what their needs are so that curriculums could be tailored to those specific skills.

The high tech industry, in particular, is caught between a rock and a hard place when it comes to finding skilled workers, Rubio said. Companies say they are producing 100,000 jobs a year that need high-skilled workers, but America’s schools are only producing 40,000 qualified workers. “They have to either import skills or export jobs,” Rubio said.

To make matters worse, many of these graduating students are foreign born and are being sent back to their own countries because of the broken visa system in the United States, he said. In those cases, “we’re outsourcing talent and jobs.”

Rubio, the son of Cuban immigrants, is working to garner support for his own immigration reform bill that could be introduced as early as next week.

The Chamber has also made immigration reform a key issue, and has called for “a lawful, rational, and practicable immigration system that provides the labor we need at all skill levels, while protecting the rights of citizens, businesses, the undocumented, and those legally pursuing citizenship.”

College Summit, with support from the Citi Foundation, released a new report at the event to raise awareness of the importance of the business community in partnering with high schools and other stakeholders to support the learning needs of students.

Sheryll Poe is Senior Writer at the U.S. Chamber of Commerce.