U.S. Chamber of Commerce Foundation / BHQ / Charging Forward: A Marine’s Journey from Home to Battlefield – And Back
General Foundation

Charging Forward: A Marine’s Journey from Home to Battlefield – And Back 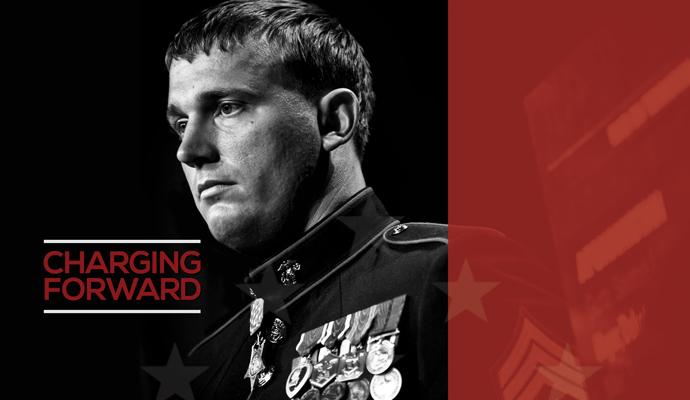 The author of this article is Sgt. Dakota Meyer. A brief biography of the author is located at the bottom of the page.

When I joined the Marines at 17 years old, I thought I knew exactly what I was signing up for. Like many of our men and women in uniform, I was looking for an adventure outside of the small Kentucky town that I’d grown up in. Now, after deploying to combat zones, receiving the Medal of Honor for my actions in Afghanistan, and traveling the world, those early days almost seem like a lifetime ago. Still, I remember getting on the bus in Kentucky that would take me to the Marine Corps Recruit Depot in South Carolina and thinking that a fourteen-hour bus ride would be tough. I quickly learned when I reached Parris Island that tough takes on a whole new meaning at boot camp. I’ll never forget when the bus crossed the swamp to the island and I got my first taste of the drill instructors.

“Put your head between your legs! Don’t move or blink!”

“Outside! Keep your mouths shut!”

And so began three of the most difficult months I’d experienced in the first 18 years of my life. From the beginning, boot camp aims to strip you of everything you are and everything you think you know. And man, I thought I knew a lot.

I came from the farmlands of central Kentucky where I had taken down my first eight-point buck at eight years old. By the time I enlisted I had a decent working knowledge of numerous firearms and hunting and that had made me confident in my ability to strike a target. I started to get the hint when the Marine recruiter at my high school was less than impressed with my so-called “experience,” but my boot camp drill instructors really drove it home.

The point of boot camp, however, is to take away your overly-inflated ego and replace it with a more flexible mental toughness. You are never going to know everything, but you should be able to handle anything. What the drill instructors at Parris Island were really doing was preparing us to lead the difficult lives we had volunteered for. There is nothing easy about raising your right hand and swearing to dedicate your life to the military, especially in a time of war. The resiliency training in boot camp is as essential to doing your duty as any tactical course or physical fitness preparation. Still, when I left boot camp, I could never have imagined the direction my life would go.

After two years of training as an infantryman and later as a sniper, I began a series of deployments that would stretch me and several others to the breaking point. There were some days when we would engage the enemy and all we had was our training and each other. There were other days that would pass without incident and yet I was constantly on alert, eyes scanning ridges and valleys for any signs of danger. Situations could turn ugly in an instant. Then on September 8, 2009, the unthinkable happened and I lost four of my brothers.

The struggle to cope with that loss remains a challenge to this day, but it is not unique to me. When I returned home, I faced the same struggle with readjustment that several veterans face. I was lucky to have a home and the strong Kentucky community to go back to, but I had a hard time getting excited about football and holidays when my mind was stuck on one day in the past, thousands of miles from America.

When President Obama called me in 2011 and told me that I was being awarded the Medal of Honor for my actions on that day, I told him I didn’t want it. That day had been the worst of my life. I truly felt like I didn’t deserve the military’s highest award for valor for a mission I thought was a failure.

When I told the president this, I’ll never forget his response. He said, “It’s bigger than you, Dakota.”

He was right. I had a choice to make: I could remain in that negative place, or I could take charge and do something positive. I decided that I had to do something to honor the memories of the men and women that hadn’t made it home. I will never fully understand why my life was spared time and again during my deployments, but from that moment on, I was going to make sure it wasn’t all for nothing.

After I received the Medal of Honor, for better or for worse, I was placed under a spotlight. Redirecting that spotlight to help other people was how I chose to honor my brothers. I set out on a new mission to help my fellow veterans make that same difficult transition that I had made from a service member to a civilian.

Back in 2011, post-9/11 veterans were facing an unemployment rate greater than 12%. For guys like me who were under the age of 25, that rate was closer to 30%. One of the toughest challenges a service member will ever experience is the transition process back to the civilian world. For years after I came back, I faced that same struggle. I had no idea what I was going to do next and in the back of my mind I wondered, “What employer out there is going to be looking for a sniper?”

I loved serving my country as a Marine sniper, but I came to realize that this was not the only thing I did in the military. I also supported and led teams, managed high-value equipment, received world-class technical and medical training, and obtained countless other skills that would catch the attention of several HR managers.

Eventually, a few employers took notice and I ended up finding work in construction and later in defense contracting. It turns out the skills from my military background were highly transferable. I just needed to be able to translate them from technical military language into something a civilian recruiter could understand. In essence, I needed to learn how to effectively communicate my value and market myself to an employer–I needed to create my personal brand.

When I was presented with the opportunity to work with Toyota and the U.S. Chamber of Commerce Foundation’s Hiring Our Heroes program, I knew that this was something I had to be involved in. Hiring Our Heroes hosts hundreds of job fairs a year exclusively for veterans and military spouses, and so far they have helped over 18,400 people get jobs. It didn’t take me long to see that this program had a potentially winning formula. However, as I began attending the fairs and taking a look at some of the résumé being presented, I could see that other veterans were having the same problem I had experienced with branding myself. In a tough economy, employers are looking for that “x factor”–that unique bit of background that can be the difference between your resume ending up in an employer’s hands or in the trash. Military service can be that “x factor” but you need to know how to properly communicate it to a civilian employer.

Less than 8% of Americans can point to military service on their resumes, yet some of the men and women I met merely added a line with their military occupational specialty (MOS) and maybe a couple of sentences about the technical aspects of their roles. A lot of them didn’t mention that they were in the top 5% of their class in a world-class military course or that they had been responsible for coordinating and executing the transfer of millions of dollars in personnel and equipment across oceans.

I began to make it a point to tell my story to the veterans I met at these fairs so that they could then turn around and tell theirs to employers, both in person and on paper. Helping veterans tell their story was exactly what we had in mind when Hiring Our Heroes, Toyota, and I launched the Personal Branding Resume Engine, an online tool that takes the entirety of a service member’s military career and turns it into an attractive and effective civilian resume and 90-second elevator pitch. A stable job can make a world of difference in the life of a veteran and for his or her family. Being a part of the effort to get these veterans hired has made a world of difference to me.

In addition to my work with Hiring Our Heroes and Toyota on the Personal Branding Initiative, I decided to start my own business–DTM Construction Inc. One of my goals with creating this construction business is to hire veterans. As owners of businesses large and small, we all have a responsibility to give veterans a fair shot at employment. And I know firsthand that when you hire a veteran, you will not be disappointed.

From boot camp to the White House, I feel like I’ve met every type of person. A good friend of mine and fellow combat veteran, Bing West, said it best: “Under fire, some men put their faces in the dirt, most shoot back, and a very few charge forward.” Our nation’s veterans are under fire, trying to scrape out a new life in an unfamiliar environment in a difficult economy. Yet, every day I see them showing up and making a decision to charge forward. This is the kind of resilience we need in our businesses and schools and government. Charge forward with us, and let’s change the story for these veterans and for our country.

Sgt. Dakota Meyer was born and raised in Columbia, Kentucky and enlisted in the United States Marine Corps in 2006. A school-trained sniper and highly skilled Marine infantryman, Sgt. Meyer deployed to Iraq in 2007 for Operation Iraqi Freedom, and to Afghanistan for Operation Enduring Freedom during 2009–10. In 2011, he was awarded the U.S. Congressional Medal of Honor, the highest military decoration awarded by the United States government, for his service in the Battle of Ganjgal.