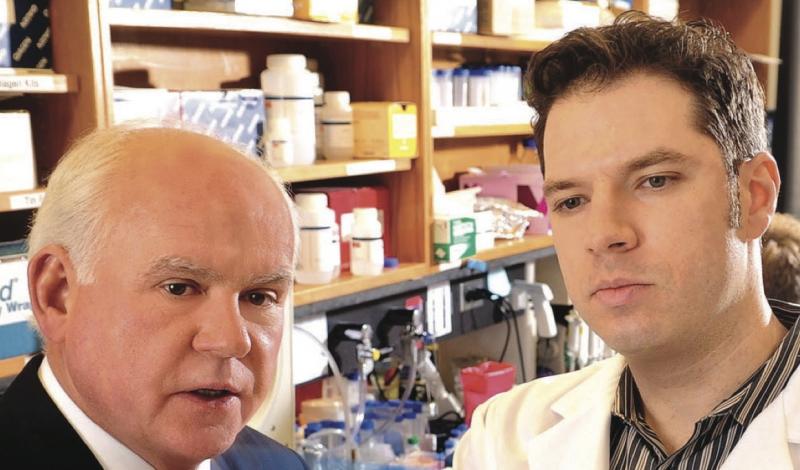 It is available via PDF here.

In classical research, an investigator generates a question or hypothesis and then collects information in a systematic way to answer that question or test the hypothesis. In the past few years, however, several technological innovations have converged to open a completely new way to approach scientific questions: data-driven research.

Some of these advances have become familiar to the world at large, such as the rise of Big Data and cloud computing. Others, including the development of next-generation gene sequencing machines, are less widely known. Taken together, they are launching the University of Alabama at Birmingham (UAB) and other leading research centers into a new era of discovery.

In data-driven research, you don’t start with a narrow question. Instead, you collect a huge amount of data and then look for emerging patterns in those data. At UAB, data-driven research is generating fresh understanding in how to treat and prevent disease. It is also leading directly to the creation of new products and businesses, and by training a new generation of innovation-savvy students, we are enabling the United States to maintain its global leadership role in research and development. 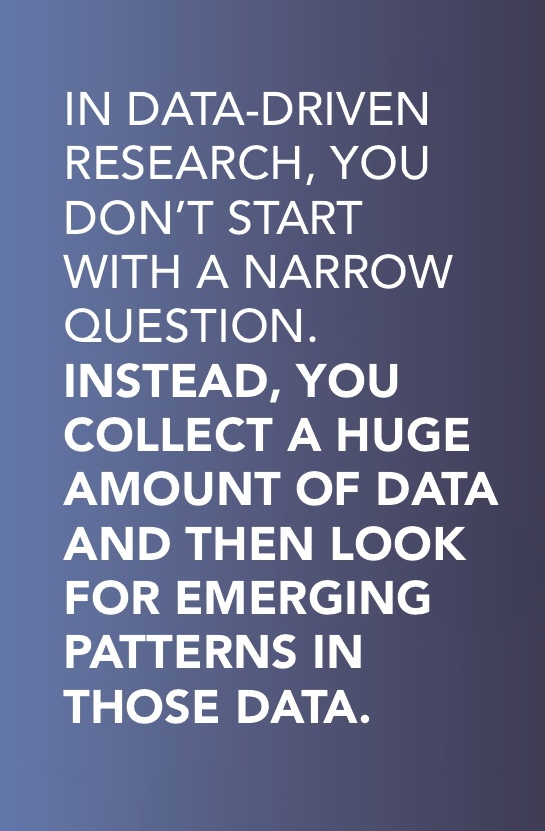 A hypothesis-driven researcher might say, “I know there is a gene related to cancer in the European population; is the same true for those of African descent?”

The data-driven researcher will be more open-ended, saying, “I’ll bet something in the genetic makeup of these populations is related to cancer.”

Both approaches are valid, but it is clear that the latter offers the possibility of making surprising new discoveries. And the history of science shows that breakthroughs often emerge from unexpected directions.

Genetics is a leading example of a field that is being transformed by data-driven science. While it took more than 10 years for the Human Genome Project to produce the first complete map of human DNA, the next-generation sequencing machines now used by researchers at UAB and other institutions can do that work in a matter of days. Illumina, a leading maker of DNA sequencing machines, estimates that 228,000 human genomes will be sequenced in 2014—a number projected to double every 12 months. With the critical mass of genetic data currently available, researchers are uncovering new links between DNA patterns and the onset and progression of disease.

We believe that we must first invest in our own strategic priorities before asking others to partner with us. That is why UAB leadership plans to dedicate $200 million over the next five years toward accelerating research, with support from The Campaign for UAB: Give Something, Change Everything, the institution’s largest-ever fundraising campaign, with a goal of $1 billion. A significant part of these funds will be used to recruit accomplished investigators who are national and international leaders in genomics, personalized medicine, and informatics.

UAB is tackling several important health problems for our area of the country through this accelerated effort. Data-driven discovery promises to identify new approaches to tackle the high rates of cancer, diabetes, obesity, and stroke seen in the South. Our research will also specifically address the significant health disparities along socioeconomic and racial lines.

The Power of Partnerships

To achieve these goals, we are forming new strategic research partnerships. This year, we created the UAB-HudsonAlpha Center for Genomic Medicine, which links UAB with the HudsonAlpha Institute for Biotechnology in Huntsville. HudsonAlpha was created by two entrepreneurs who raised $130 million in private and state funds to build a 270,000-square-foot institute on a newly created 150-acre biotechnology park. In 2007, they recruited Richard Myers, Ph.D., former chair of genetics at the Stanford University School of Medicine and a major researcher in the Human Genome Project. Myers serves as HudsonAlpha president, leading more than 100 scientists.

HudsonAlpha’s key contribution to the UAB-HudsonAlpha partnership is capacity. While UAB has four next-generation genetic sequencers, HudsonAlpha has 12. But human genomics research also requires large populations of patients and investigators who specialize in clinical studies. That is what UAB brings to the synergy, as it is one of the largest public academic medical centers in the United States, with more than 1 million patient visits a year and annual research funding of more than $450 million.

You can imagine an outcome from UAB’s investment in this research: novel potential biological targets that can be used as the starting point to develop new molecular therapies. A partnership with Birmingham-based Southern Research Institute is already fueling rapid progress in this area. UAB has expertise at both the front and back ends of the drug discovery pipeline: the initial identification of potential targets through data-driven basic and clinical research and, at the back end, human clinical trials. Southern Research—which has discovered seven FDA-approved cancer drugs—excels in the middle pipeline steps, including high-throughput screening, medicinal chemistry, pharmacokinetics, toxicology, and initial safety and efficacy testing. This Alabama Drug Discovery Alliance already has 17 active potential drugs in its pipeline, and as a measure of discovery rigor, 11 more have been paused or terminated.

At UAB, we have long recognized that innovation happens when researchers from different disciplines interact. This viewpoint, that UAB is an “institution without walls,” becomes even more important in the era of data-driven research, which requires close collaboration between investigators from a wide variety of traditional specialties.  In the UAB Big Data Research and Analytics Laboratory, for example, engineers, physicians, computer scientists and statisticians have joined forces to develop new ways to manage, analyze, and visualize large datasets. In addition to serving as a central facility to process data generated through research across campus, the lab is pioneering new hardware and software designs to evaluate those data faster and more efficiently.

One particularly exciting study in the lab is using data-driven research methods to develop new ways of detecting Parkinson’s disease. The investigators started with a large collection of MRI brain scans from patients with Parkinson’s and a similar number of scans from healthy patients. Then they designed algorithms to look for patterns that distinguish one type of brain from the other. Their software found subtle changes that occur in the early stages of Parkinson’s, suggesting that MRI images collected in clinical practice may be able to be used to assist in diagnosing the disease. Because the technique works with MRI scans that can be produced by any community hospital (rather than relying on specialized machines available only at major medical centers), it has great potential for widespread use. The researchers recently launched a new project that will use the same approach to study autism. Their ultimate goal is to extend the work to improve diagnosis of Alzheimer’s and other brain diseases.

Innovations developed in the Big Data Research and Analytics Lab also benefit businesses throughout our region. The lab’s scientists are already assisting several Alabama companies as they embark on data-driven initiatives. And as more businesses seek the competitive advantage offered by Big Data analysis, these partnerships will continue to grow.

American businesses have another pressing data concern: how to keep their information safe. Cybercrime now costs the U.S. economy an estimated $100 billion per year, with theft of intellectual property accounting for the largest share of those losses. But here too, data-driven research is providing fresh solutions. Investigators in UAB’s Center for Information Assurance and Joint Forensics Research are developing new ways to convert the torrents of data flowing through the Internet into actionable intelligence.

Led by UAB Director of Research in Computer Forensics Gary Warner, UAB cybercrime researchers began by creating a vast database of spam e-mails and malicious software that now holds more than 1 billion e-mails and 11 million malware samples. Then they developed new methods to rapidly analyze that data and compare it with the 1 million new messages arriving in the database each day. Within minutes, their algorithms can identify patterns that point to major new cyberattacks—and identify the sources of these assaults. Just as important, the data are securely tracked so they are admissible as legal evidence, which allows law enforcement officials to prosecute the criminals responsible.

UAB efforts have assisted the FBI and other law enforcement agencies in cases that have led to the arrest of more than 100 cybercriminals. In one high-profile case, Warner and his students helped the FBI identify 17 foreign nationals who had participated in a massive online fraud ring that stole $70 million from hundreds of American companies. 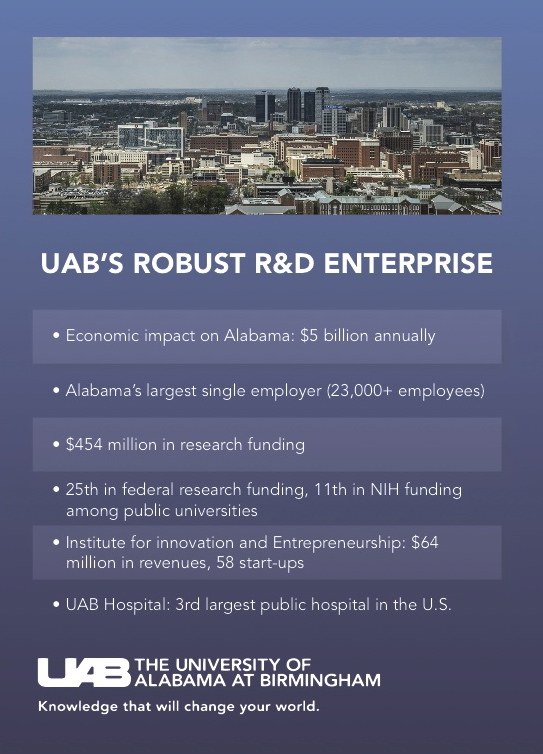 ommercially available cloud computing technology to process millions of spam e-mails each hour. By rapidly testing the links in each e-mail, the system can create a constantly updated blacklist to prevent innocent users from visiting malicious websites.

This leading-edge research has tremendous commercial potential. Last year, UAB launched Malcovery Security, a spin-off company that helps businesses protect themselves against cyberattacks. Its customers include Facebook, Visa, IBM, LinkedIn, eBay, and Citi. Malcovery is now housed at Innovation Depot, a Birmingham business incubator and public/private economic development effort that operates in partnership with UAB. Innovation Depot focuses on emerging biotechnology/life science, information technology, engineering and service businesses. There are currently 95 companies operating out of the facility, and over the past five years, Innovation Depot has had a $1.25 billion economic impact on the Birmingham metropolitan area.

The UAB Institute for Innovation and Entrepreneurship, which launched last year, is designed to amplify our economic impact. It identifies high-potential intellectual property developed at UAB, and provides an entry point for industry collaborations—partnerships that play an essential role in supporting and accelerating our research programs. The Institute has another vital mission: to enhance academic programs in entrepreneurship and innovation that will inspire the next generation of American businesses.

New opportunities for data-driven breakthroughs are continually emerging throughout our campus. These are tremendously exciting times that bode well for the future prosperity of Birmingham and Alabama, and for America’s global competitiveness in research and development.

Ray L. Watts, M.D., is the seventh president of the University of Alabama at Birmingham

Why Economic Success is So Connected to Quality Childcare
Building Bridges: Creating Strong Partnerships for Early Childhood Education
From John Legend to Apprenticeship's John Lennon: A Wrap-up of Talent Forward 2019
This form needs Javascript to display, which your browser doesn't support. Sign up here instead