Human Capital in a Global Age 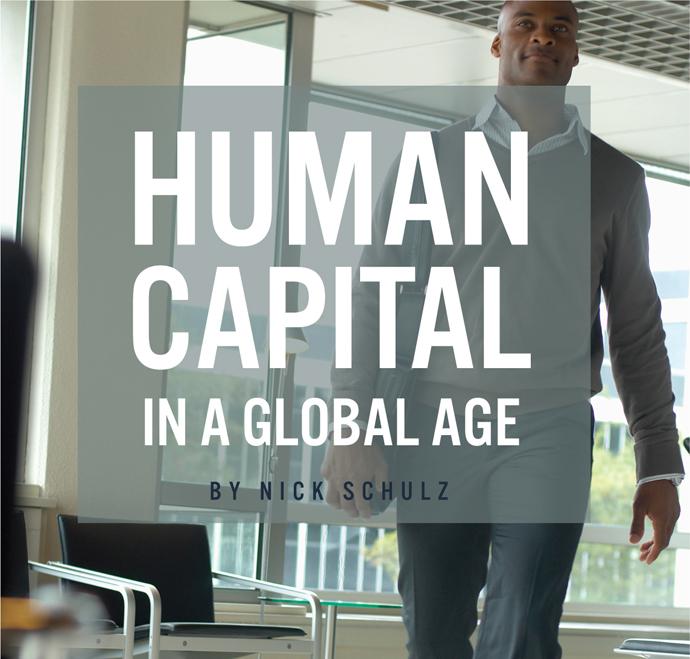 The rapid rise of emerging countries such as China, India, Indonesia, Brazil, Mexico, and others means new challenges and new opportunities for the United States. So how will America fare in this latest wave of global competition?

In many ways, the United States is exceptionally well-positioned to compete as the wealthiest, most advanced power in history.

What’s more, America boasts abundant natural resources and other advantages—expanses of arable farmland; huge supplies of oil, coal, and natural gas; the greatest technical colleges and universities in the world; an entrepreneurial culture; and a large and growing population.

No other country today possesses all of these endowments at the scale of our continental nation.

Nevertheless, to maximize these advantages—and to make sure the United States doesn’t lose a step—it would be wise for policymakers and the business community to focus attention on America’s human capital. Human capital includes an individual’s skills, education, talents, habits, personal networks, and more that enable him or her to produce income.

While America’s natural and physical capital—its forest and factories, farms and chip fabs—are critical to its success, ensuring a deep stock of human capital is what will separate the country from its rivals.

Over the last half century, economists, social scientists, and others have developed a deeper understanding of what drives economic success. Human capital was once largely overlooked; now it is viewed as central to economic dynamism.

The Nobel Prize-winning economist Gary Becker was the first person to emphasize the importance of human capital. Becker differentiated human capital from other forms of capital in the following way:

“Schooling, a computer training course, expenditures on medical care, and lectures on the virtues of punctuality and honesty are also capital. That is because they raise earnings, improve health, or add to a person’s good habits over much of his lifetime. Therefore, economists regard expenditures on education, training, medical care, and so on as investments in human capital. They are called human capital because people cannot be separated from their knowledge, skills, health, or values in the way they can be separated from their financial and physical assets.”

The fact that people can’t be separated from the human capital is critical – call it the inseparability principle. It has enormous implications for issues such as immigration, labor market regulation, education, and more.

It’s one thing to acknowledge that a person’s skills matter, but how much do they matter in the bigger picture?

Now think of human capital in the context of an increasingly globalized world. The most competitive nations will be those that provide the best climate for business. This means creating a welcome environment for both start-up companies and established firms.

A key to the success of start-ups and mature companies is talented personnel—human capital. While the United States is blessed with millions of skilled native-born men and women, there is ample human capital elsewhere in the world, too. For the United States to remain at the leading edge of the world economy, its firms need to be able to tap talent from around the world.

The United States is fortunate to have a huge comparative advantage over other nations when it comes to attracting and developing human capital. America boasts the best science, engineering, and technical colleges on the planet, including MIT, Caltech, Georgia Tech, Stanford, Carnegie Mellon, University of Texas, Purdue, University of Maryland, and dozens more.

Year after year, these schools turn out some of the finest undergraduate and graduate students. What is more, they act as magnets for foreign talent as the brightest and most ambitious foreign students want to come to the United States to study, learn, and develop—to build their human capital.

Yet, in recent years, a worrisome development has arisen. According to the researcher Vivek Wadhwa and others, many educated foreigners are now electing to leave the United States to return to their home countries.

What are the reasons? Many of them cite the difficulty of navigating and complying with America’s visa process. Others point to new and attractive emerging opportunities to work and further their careers back home in countries such as China and India.

Either way, this is a relatively new phenomenon. For generations, skilled immigrants who came to study in the United States often wanted to stay here, to work in American companies, or to start companies of their own. The United States was rightly seen as the best—and for some refugees, the only—place to leave shackles behind and make dreams come true.

Now the mood among many skilled immigrants is changing with significant consequences for American economic and technological leadership. America is no longing their only choice.

“This is America’s loss,” says Wadhwa. “Innovation that would otherwise be happening here is going abroad. Without realizing it, we are exporting our prosperity and strengthening our competitors.”

It is not too soon to begin worrying about America’s comparative advantage in higher education. While the U.S. university system is still without peer, the rest of the world is eager to catch up.

As researcher Ben Wildavsky has pointed out, a revolution in higher education is taking place across the globe. Aspirational nations are investing in their universities in an effort to attract top students.

Universities and colleges in China, India, the Middle East, and South America are looking to keep their best and brightest at home, and they know they must raise the quality of education at their universities to do so. They are also looking to take advantage of the greater mobility made possible today by inexpensive air travel and communications systems. This mobility makes it easier to attract smart people from outside their borders.

The good news here is American universities have not been slow to react. Many universities and colleges are experimenting with satellite campuses overseas. Some of these experiments have been successful, while others have posed problems and challenges. Either way, the response signals a healthy entrepreneurial recognition of increased competition. Much more can be done.

All in all, this growing level of international competition in higher education is a welcome development and something to be embraced. It will make American universities more responsive to students and to the needs of business and the broader economy. Make no mistake though:  the competition has been joined by a number of eager players.

New Minds: A Lever for Growth

It is important to highlight the role skilled immigrants play in powering growth in the United States. A few examples help illustrate this point.

For America to remain at the leading edge of technology development, it will need to be the home to new science, technology, engineering, and mathematics (STEM)-related companies. These are the companies that will push the next wave of productivity-enhancing services and products into the marketplace.

As it turns out, skilled immigrants are more likely to help create these companies. Of the new STEM companies founded between 1995 and 2005, one-quarter had at least one immigrant founder.

Skilled immigrants also patent at a higher rate than native born Americans, helping build the total stock on useful knowledge upon which advanced economies can grow.

Too often, immigrants are viewed as a problem to be solved, instead of an asset. They are seen as a drain on resources instead of a means of renewing American vitality and optimism. Yet, viewed through the lens of human capital, we can more clearly see immigrants for who and what they are—human beings with talent, ambition, and potential. They are the ultimate resource. As the global competition for talent grows, the United States must be at the forefront in attracting, retaining, and developing human capital.

In contrast to the information-age theorists, we are far from the end of the “petroleum” age or even the industrial era. As the world’s population grows and its middle class expands—particularly in the developing world—the demand for products, either for direct consumption or used in manufactured goods, seems likely to continue to expand. Energy consumption itself, according to International Energy Agency, could rise as much as 50 percent by 2030, with over 84 percent of that increase coming from fossil fuels.

Some assert that this new scarcity regime hurts the United States; it is assumed that as an already developed country, there is little more to be exploited. The prediction of “steady American decline,” predicted by researchers at the Singapore Ministry of Trade and Industry, is just the most recent example of a globalized conventional wisdom.

Nick Schulz serves as an NCF Scholar.
He is the DeWitt Wallace Fellow at the American Enterprise Institute, the editor-in-chief of American.com, and a columnist for Forbes.com. Schulz is also the co-author with Arnold Kling of From Poverty to Prosperity: Intangible Assets, Hidden Liabilities and the Lasting Triumph Over Scarcity.