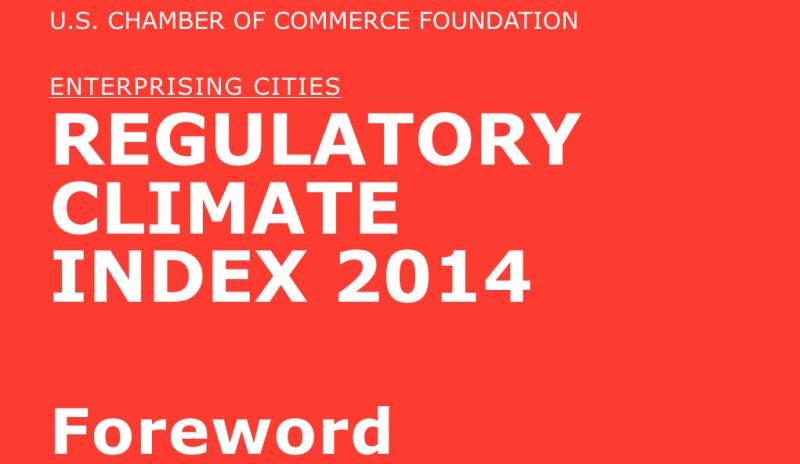 While the important role of entrepreneurship is widely understood, it is less clear what policy conclusions flow from that fact. Some advocate for the formation of entrepreneurial clusters. Others favor public loan guarantees for new startups. A third approach is to support the technical education that entrepreneurs need.

One can sensibly argue, however, that the first job of government is to do no harm. In the area of entrepreneurship, doing no harm means imposing only those regulations where benefits clearly exceed costs. In an era of fiscal restraint, it makes sense to reassess rules that could restrict new firms before writing another taxpayer-funded check to support an unproven public venture capital program.

The U.S. Chamber of Commerce Foundation has taken a major step forward by creating basic measures of the regulatory environment for 10 cities. The Foundation’s approach follows that of the World Bank’s Doing Business Report. The idea is to ask local lawyers how many steps and how much money it would take to undertake a simple, standardized task like building a warehouse or starting a new business. The World Bank’s comprehensive international data have made an invaluable contribution to the policy discussion. Researchers have been able to show the immense costs that excess regulation places on the national economy, and local policy leaders have been forced to explain why simple tasks are so difficult in their countries.

National regulation data have limited use in the United States. Our country is enormously diverse in government as in many other things. Texas and California, for instance, are very different places in which to do business. If we are ever going to understand the nature and impact of local regulations, we must have city-level measures of regulatory burdens.

The World Bank’s measures have not been without controversy, and there is much to argue about here as well. For example, I believe that the report understates the difficulty of construction activity in Boston. The local lawyers were asked about a project that didn’t require a special permit. There’s not much space in Boston that doesn’t require either a variance or special permit.

Yet these measures are a crucial first step. They will surely be refined over time and hopefully expanded to a wider range of cities. America will start to understand local regulations better, which should be a first step toward better regulatory policymaking.

I am delighted to have been a part of this project and am grateful that the U.S. Chamber of Commerce Foundation has supported this research.