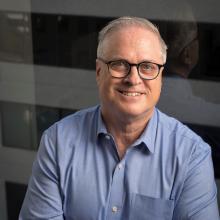 Bob Witeck is the President and founder of Witeck Communications, Inc. with over four decades professional communications experience in the private sector and in public service. He is a seasoned communicator, public speaker, public affairs professional, speechwriter as well as a trusted crisis communications expert. His pioneering firm is recognized as the first LGBT-owned business enterprise certified by the National Gay & Lesbian Chamber of Commerce.

Before opening the firm, Bob Witeck was senior vice president for Hill & Knowlton Public Affairs, the international public relations and public affairs firm. On Capitol Hill for over a decade, Witeck served as communications director for the U.S. Senate Committee on Commerce, Science and Transportation and as a Senate press secretary and legislative assistant. He is a graduate with distinction of the University of Virginia, where he was named an Echols Scholar.

In their 25th anniversary issue published in 2003, the editors of American Demographics magazine selected Bob Witeck as one of 25 leaders ‘who have made significant contributions to the worlds of demographics, market research, media and trend spotting’ for his pioneering work on America’s lesbian, gay, bisexual and transgender population. Witeck is also co-author of "Business Inside Out: Tapping Millions of Brand-Loyal Gay Consumers" (Kaplan Publishing, September 2006), recognized as the first book advising business leaders on successful market strategies embracing LGBT households, influential and stakeholders.

A frequent speaker and writer, in addition to his book, he has contributed a diverse range of opinion columns, professional articles and contributing chapters to journals. He served five appointed terms on the board of directors for the National Lesbian and Gay Journalists Association. He has served on the board of directors for the NEA Foundation, and on the first national board for the Gay and Lesbian Alliance Against Defamation (GLAAD), as well as the Gay Lesbian Straight Education Network (GLSEN). In 2015, he was named to Virginia Governor Terry McAuliffe’s first-ever LGBT Tourism Task Force. In June 2016, Governor McAuliffe appointed Bob Witeck to a four-year term on the Board of Visitors of George Mason University. He currently serves on the Board of Directors of the Matthew Shepard Foundation.