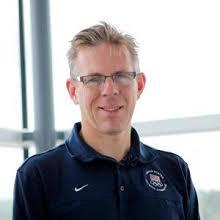 Mike Knopp brought rowing to Oklahoma City University as the first rowing coach for OCU ever. OCU became the first varsity rowing program in Oklahoma in 2004 after Knopp started the program as a club team in 2000.

Under Knopp’s guidance, OCU has garnered multiple achievements on and off the water. The success of OCU rowers has increased every year during Knopp’s tenure and has included multiple rowing champions and seen OCU rowers compete on the U.S. Under-23 national team.

Knopp has been instrumental in growing the sport in the state. Knopp was also the driving force behind the OCU Head of the Oklahoma Regatta, an annual rowing competition that attracts more than 50,000 spectators and competitors to Oklahoma City each year. This event has been recognized as the “National Regatta of the Year” and was the first U.S. Rowing competition to include night racing.

Other achievements include the designation of the Oklahoma River as an official Olympic training site, the construction of the Chesapeake finish line tower, multiple local, national, and international championship competitions, and the master plan development of the Oklahoma River.  Knopp also serves as the executive director for the Oklahoma City Boathouse Foundation. In this position Knopp helped create the first community rowing and kayaking programs as well as the Chesapeake Boathouse.

Knopp has been recognized with several awards including the Abe Lemons/Paul Hansen Award for Sports Excellence, Jack Kelly Award, Oklahoma City Business Record Forty Under Forty Award, Journal Record Achievers Under Forty Award, Leadership OKC Class XXV, March of Dimes Headliner Special, Harry Parry Award for Foundation Excellence and the Neil Horton Award.
OCU created the first collegiate varsity canoe/kayak program in the country in 2010. During the same year, OCU opened the $10 million Devon Boathouse, which serves as home to OCU rowers and as a training site for U.S. High Performance athletes. In 2011, U.S. Canoe/Kayak, the national sport’s governing body, relocated its headquarters to Oklahoma City. Knopp serves on the governing board for this organization.

Originally from Minnesota, Knopp discovered rowing as a high school student in Annapolis, Md., watching the crew from the U.S. Naval Academy. He began pursuing his passion as an undergraduate at Oklahoma State University and helped re-establish OSU’s club rowing program.

Knopp worked for the Federal Aviation Administration as legal counsel before joining OCU. Knopp, who was raised in Minnesota and Maryland, has rowed for 15 years. As a high schooler in Annapolis, Md., Knopp became interested in rowing by seeing the Naval Academy rowing crew.
Knopp holds a juris doctorate degree from the University of Oklahoma. Knopp graduated from Oklahoma State University in 1994 with a degree in economics. Knopp graduated high school from Edmond Memorial in 1990.  Tempe, Knopp’s wife, also works with youth and high school rowers. The couple have two boys, Keaton and Cameron.