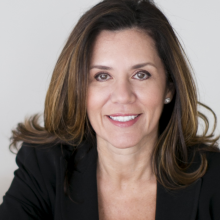 Alba Baylin is Vice President of Community and Stakeholder Relations, Coca-Cola North America (CCNA). In this role she leads community giving and engagement, stakeholder relations, employee volunteerism, disaster relief, community board placements and the 5by20 women’s initiative for CCNA.

Alba held the position of Vice President of Customer Marketing for Coca-Cola’s Foodservice customers from September 2015 until November 2018. Prior to that she served as Hispanic Marketing Group Director, for Coca-Cola North America, where she led the Company’s largest ever Hispanic-focused marketing program for the 2014 FIFA World Cup, which featured award-winning digital and social media components.

Joining The Coca-Cola Company in 1999 after ten years in the hospitality industry, Alba fulfilled roles of increasing responsibility in Worldwide Public Affairs and Communications, Strategic Partnership Marketing, and Customer & Commercial Leadership. From 2007 to 2013 she was assigned to the Company’s Latin America Group, first as Director of Revenue Growth Management and later as Group Director, Shopper Marketing.

In 2018, Alba was recognized as a Top 5 Latina Rising Star by the Association of Latino Professionals for America (ALPHA) and Fortune Magazine. She also has been recognized as a Latino Leader of the Future by Latino Leaders Magazine and by Ser Padres Magazine as one of 25 Latina Executive Moms Making a Difference. Florida International University’s Chaplin School of Hospitality and Tourism named Alba the 2020 Alumni of the Year. She is a strong advocate for community service and serves on the board of the Georgia State University Foundation, Junior Achievement of Georgia and Hands on Atlanta. Alba is a graduate of the Leadership Atlanta class of 2018.

Born in Bucaramanga, Colombia, Alba holds a Bachelor of Science degree from Florida International University and a Master of Business Administration degree from the Robinson College of Business at Georgia State University. Alba is married to Marc Baylin and is a proud mom to her nine-year-old daughter Sofia.