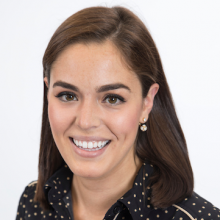 Alexandra (Alexa) Miller is associate manager for events and programs and director of our Digital Empowers Campaign at the U.S. Chamber of Commerce Foundation’s Corporate Citizenship Center. Alexa assists with the programmatic efforts and contributes to the research and event planning of the core issues valued by the CCC team and business network.

Her professional interest areas include community and local economic development, with an emphasis in education, food security, and diversity and inclusion. She also supports these interests in her personal life as a volunteer arts education teacher for Project Create and a founding member of Travel + Social Good's Washington, DC chapter.

Prior to her role in the Chamber, Alexa was active in Missouri State politics; as an intern, she worked for state and federal leaders in the Capital and district offices. While in this arena, she later lobbied on behalf of University of Missouri students as a registered lobbyist and helped engage them in the political sphere as the chairman of the American Enterprise Institute’s OnCampus Program.  Her interest in education policy also opened doors to internships with the Council of Graduate Schools.

In 2015, Alexa graduated from the Harry S. Truman School of Public Affairs with a Master’s in Public Affairs - Public Policy and Graduate Certificate in Organizational Change. She also holds a B.A. in Political Science and Sociology from the University of Missouri.