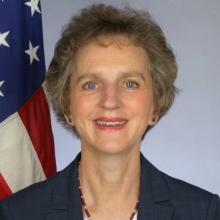 Ambassador Jennifer Zimdahl Galt assumed the role of Principal Deputy Assistant Secretary (PDAS) for Educational and Cultural Affairs on November 13, 2017. The Bureau advances U.S. foreign policy objectives through educational, professional, cultural and sports exchanges that promote mutual understanding between the people of the United States and people of other nations and create networks and partnerships to advance U.S. foreign policy goals and address global challenges and opportunities.

Prior to joining ECA, Ms. Galt was Ambassador of the United States of America to Mongolia from 2015-17. A career member of the State Department’s Senior Foreign Service with the rank of Minister Counselor, Ambassador Galt formerly served as Principal Officer of the U.S. Consulate General in Guangzhou, China, where she had the privilege of leading and mentoring a talented team of nearly 500, of whom 62 were first- and second-tour officers. Ambassador Galt’s previous postings overseas have included Belgrade, Taipei with the American Institute in Taiwan, Mumbai, Beijing, Shanghai, and the U.S. Mission to the North Atlantic Treaty Organization in Brussels. In Washington, Ambassador Galt served as Senior Advisor in the State Department’s Bureau of Public Affairs and as Deputy Director for Public Diplomacy in the Bureau of East Asian and Pacific Affairs.

Ambassador Galt holds Masters’ degrees from National Defense University and Johns Hopkins University School of Advanced International Studies (SAIS), as well as a Bachelor’s degree in political science, history and languages from Colorado College in her home state of Colorado. She was awarded an Honorary Doctorate of Juris Prudence from Colorado College in 2016. She is fluent in Mandarin and French, and also speaks Italian, Spanish and Serbian.