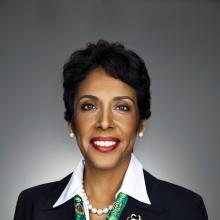 Anna Maria Chávez began her career journey in the very same Movement she now leads: the Girl Scouts.  A lifetime member of Girl Scouts of the USA (GSUSA) and an award-winning community leader, Anna developed the leadership skills that would propel her to the office of the Chief Executive of GSUSA while growing up as a Girl Scout in Eloy, Arizona.

Her experiences in Girl Scouting lit a passion for public service and social engagement that have defined her career.  Anna’s insight and desire to leave the world a better place led her from her hometown to Yale University, where she earned a bachelor's degree in American history before pursuing a juris doctorate from the James E. Rogers College of Law at the University of Arizona.  She is admitted to the Bar for the U.S. District Court for the District of Arizona, the Arizona Supreme Court, and U.S. Supreme Court.

Anna’s desire to serve others brought her first to Washington D.C., where she held numerous posts in President Clinton’s administration, including serving a senior policy advisor to former U.S. Secretary of Transportation Rodney E. Slater. She later returned to her home state of Arizona to serve the first of two female governors as Deputy Chief of Staff for Urban Relations and Community Development under then-Governor Janet Napolitano.  In this role, she promoted the governor's policies, programs, and initiatives in partnership with city, county, and tribal governments, as well as federal agencies and community organizations.

During her time in state service, Anna provided oversight for programs targeting food distribution for the hungry, shelter and supportive services for victims of domestic violence, refugee resettlement services, and shelter services for the homeless. Additionally, she oversaw Arizona’s adult services programs, including adult protective services.

Looking for opportunities to work with youth and inspire a new generation of female leaders, Anna returned to the Girl Scout Movement in 2009, serving as Chief Executive Officer of Girl Scouts of Southwest Texas.  Her achievements leading the Southwest Texas council include vastly enhancing the reach and visibility of the Council, growing the Council’s philanthropic efforts, and boosting membership.  Her success earned her the respect and recognition of GSUSA’s National Board, who appointed her CEO of the Girl Scouts of the USA in 2011.

Lauded for her leadership, Ms. Chávez received the 2013 Law College Association Award from her law school alma mater, the University of Arizona, and has been recognized as one of the 100 Women Leaders in STEM by STEM connector. She is the recipient of the 2013 Excellence in Community Service award from the Mexican American Legal Defense and Educational Fund, as well as the 2013 Graciela Olivarez La Raza Award from the National Council of La Raza.  In 2014, she was named number 22 by Fast Company in their annual list of the most creative people in business.  In addition, the Arizona National Guard presented Anna with the Adjutant General's Medal and the Diversity Champion Leadership Award.