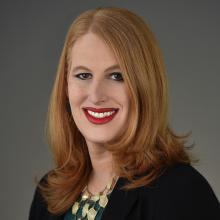 Ashley Brundage is a Vice President of Diversity & Inclusion for PNC. She self-identified during the interview process as a male to female transgender woman and subsequently was hired. Starting at PNC as a part time bank teller, she worked in various other lines of business before accepting a role in Human Resources. Ashley recently celebrated 17 years of marriage to Whitney and together they have two biological sons; Bryce, 14, and Blake, 12.

Since beginning transitioning in 2008, she has worked tirelessly to promote awareness and acceptance of gender identity and expression. She works to accomplish this goal by volunteering & serving in the community, and holding education & training sessions for corporations. She is the Past President of the Tampa Bay Diversity Chamber of Commerce. Serves on the Corporate Advisory Council for the NGLCC-National LGBT Chamber of Commerce. Also is the chair for NGLCC’s new global Trans+ Inclusion Task Force. She chaired the successful bid to host the NGLCC convention in 2019, and Visit Tampa Bay named her their Tourism Champion for 2017.

Ashley has been recognized in many areas and has received numerous awards including: 2015 PNC Performance Award, PNC’s highest employee achievement. She was awarded multiple Circle of Excellence and Market All Star Awards with PNC, The University of South Florida 2014 Community Pride Award, 2015 St Pete Pride Grand Marshal, 2015 Commendation-City of Tampa, 2016 Tampa Bay Business Journal Business Woman of the Year, 2016 Voice for Equality Award from Equality Florida, and LGBT Leadership Award from the Florida Diversity Council. In 2017, she was awarded the Robert Pope Leadership Award from Metro Wellness and Community Centers, and was a winner of the Inaugural People First Award by the Tampa Bay Business Journal. The Tampa Bay Business Journal also named her in their annual Power 100 list, the most influential and powerful people in business for 2017. In 2018, she was given the Champion Award from international non-profit Out & Equal as well as named one of Florida’s Most Powerful and Influential Women from the National Diversity Council. In 2019, she was named one of the Top 40 under 40 in the LGBTQ community nationally by Business Equality Magazine.