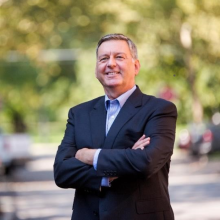 Bill Hardy is driven to change the world, citing as inspiration a quote made in 1859 to the first graduating class of Antioch College, “Be ashamed to die until you have won some victory for humanity.”

Hardy has served as CEO of Equitas Health (formerly AIDS Resource Center Ohio) for 26 years and in the process has built one of the nation’s largest HIV- and LGBTQ-serving healthcare systems.

Bill’s most strategic achievement has been leading the organization’s transition from a social service nonprofit to a patient-centered primary healthcare provider, coupled with the addition of an innovative social enterprise—full-service retail pharmacies to meet the needs of the organization’s patients and provide earned income. All profits from the pharmacies are reinvested into the organization’s continuum of services. The results of this shift have been transformational for the organization and its health outcomes, many of which exceed national data.

In 2016, Bill’s innovative visioning led the organization to announce a mission expansion to include primary care to the LGBTQ community and medically-underserved individuals, along with a rebrand as Equitas Health.

Bill and Equitas Health’s recent awards include being named 2017 Healthcare Trailblazer of the Year by Columbus CEO and Equitas Health named a finalist for the Pathway to Population Health Award. In 2016 Bill received Ernst & Young’s Entrepreneur of the Year in Health Care for the Ohio, Indiana and Kentucky region; Dayton Business Journal finalists - Executive of the Year and Not-for-Profit Business of the Year; Columbus HRC Equality Award; and Champions of Public Health Dean’s Award by The Ohio State University College of Public Health.

A native of Pennsylvania, Bill has lived in Ohio since 1978.