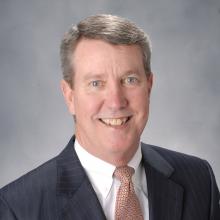 President & CEO, Fort Worth Chamber of Commerce
Bill Thornton has served as President and CEO of the Fort Worth Chamber of Commerce
since October 2000. He joined the Chamber in 1989 as director of local business development
and was named vice president of economic development in 1992. During his tenure, the
Chamber's economic development division was twice named one of the nation's top 10
economic development organizations by Site Selection magazine.
The Fort Worth Chamber of Commerce has more than 2000 member companies and its
award-winning programs, publications and initiatives are recognized nationwide.
As president, Thornton has been intimately involved in numerous community initiatives,
including the Wright Amendment agreement, the Base Realignment and Closure task force,
and most recently the formation of the Barnett Shale Energy Education Council.
Thornton has been recognized as one of the top economic development practitioners by
Southern Business & Development magazine, and Businessman of the Year by the Fort
Worth Business Press. In 2007, he was named one of Fort Worth’s 50 Most Powerful
People by Fort Worth, Texas magazine.
He is a past chair of the Metro 8 Chambers, which represents the largest cities in Texas on
many legislative fronts. Thornton is also a member of the American Chamber of Commerce
Executives, serves on the Board of Trustees for the Davey O’Brien Foundation, Advisory
Board of Directors of the Van Cliburn Foundation, and is a former two-term president of the
Candleridge Homeowners Association.
Thornton holds both a BA and MA degree from Texas State University, where he coached
football for 10 seasons and then coached for six years at TCU prior to joining the Chamber.
Thornton is also a past inductee to the Texas State University Athletic Hall of Honor.
He is a native Texan and has been a resident of Fort Worth for more than 30 years. He is
married to Fort Worth banker Lyle Thornton, and between them share four children and
three grandchildren.

Fort Worth, TX
November 12 - 8:00 am to 1:00 pm
This form needs Javascript to display, which your browser doesn't support. Sign up here instead