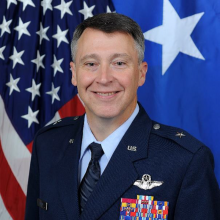 Brigadier General Thomas B. Hatley is Vice Director, Strategic Plans, Policy, and International Affairs, J5, National Guard Bureau. In this capacity, he assists the director in providing strategic direction, policy guidance, and planning focus recommendations to the Chief, National Guard Bureau, a member of the Joint Chiefs of Staff and military advisor to the President, Secretary of Defense, and National Security Council, ensuring the readiness of more than 453,000 Army and Air National Guard personnel across the full spectrum of national security concerns. Furthermore, he also coordinates across the breadth of the Department of Defense, as well as with interagency and international partners in the course of executing the National Defense Strategy.

Brigadier General Hatley is a 1995 distinguished graduate of the Air Force Reserve Officer Training Corps from Louisiana Tech University. He has commanded at the squadron and wing level, across Air Force Global Strike Command and Air Combat Command. In addition, he is a graduate of the United States Air Force Weapons School, the United States Air Force School of Advanced Air and Space Studies, and the National War College. His staff experience includes assignments on the Chairman’s Joint Staff as well as the National Guard Bureau Joint Staff.