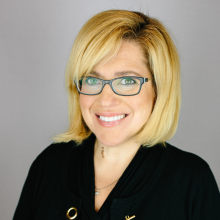 Celeste Carrasco, a Director of Federal Public Affairs for AT&T, is responsible for executing national strategies that achieve corporate legislative and regulatory objectives, presenting company positions to external stakeholders in key issue areas and managing community partnerships with non-profit organizations in the Latino, corporate social responsibility and consumer advocacy communities.
Celeste was honored as City Year Idealist of the Year in 2015 and was honored to receive the herMANA award in 2016 by the MANA organization. She has also been the recipient of the President’s Volunteer Service Award multiple years running. All recognitions highlight her passion for volunteerism and commitment to the communities she represents.

Previously, Celeste was an Area Manager in New Jersey, where she led a team of 16 managers, with diverse roles and responsibilities in support of over 200,000 AT&T Business customers. Focused on cost saving initiatives, Celeste was effective in reducing expenses and increasing productivity in her management of the AT&T Business Managed Internet (MIS) budget and human capital objectives. She was also involved with the MIS Pilot Program, which is tasked to create and implement the most efficient model to support AT&T customers by providing the “Highest Quality at the Lowest Cost”. Celeste’s most significant achievements were facilitating the off-shoring of MIS support to Sykes in 2005 and in 2011, the migration of this labor back into AT&T facilities in Bangalore, India, Cyberjaya, Malaysia and Piscataway, New Jersey.

Celeste was recruited in 1996 while she was still a senior at Rutgers University, and became one of the first 10 team members to support the newly launched AT&T WorldNet Dial. From that role, she transitioned to working behind the scenes as a Process Owner for AT&T Virtual Private Network (VPN) Business Services, and later held multiple diverse roles within the MIS organization where she was a driving force behind many of the global virtual center designs in use today.

Due to all her accomplishments, Celeste was one of only fifty leaders across AT&T selected to participate in the 2011 Accelerated Development Program (ADP) – a year-long, intensive AT&T experience designed to advance business acumen and increase strategic perspective as preparation for future leadership opportunities.

Celeste holds a B.A. from Rutgers University, a MC in Project Management and a Masters in Management from Stevens Institute of Technology. She is the President of the DC Chapter of HACEMOS, The Hispanic/Latino Employee Association of AT&T, and is a strong advocate of diversity and inclusion. A native of Argentina, Celeste and her family live in Washington, D.C.