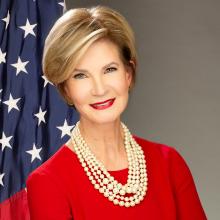 Commissioner, Federal Maritime Commission
Commissioner Rebecca F. Dye, of North Carolina, was nominated by President George W. Bush on June 13, 2002 and was confirmed by the United States Senate on November 14, 2002. She was nominated to her second term by President Bush on July 12, 2005 and confirmed by the Senate on July 22, 2005. She was nominated to her third term, which expires on June 30, 2015, by President Barack Obama and confirmed by the Senate on April 14, 2011.
Prior to her appointment to the FMC, Commissioner Dye was Counsel to the Transportation and Infrastructure Committee of the U.S. House of Representatives. She held that position from 1995 until 2002. As Counsel, she provided advice to Members of Congress on issues pertaining to commercial shipping, international maritime agreements, oil pollution, maritime safety and law enforcement, the Federal budget process and Federal financing.
Commissioner Dye comes to the Commission with an extensive background in maritime matters. She began her Federal career as a commissioned officer and attorney in the Coast Guard's Office of the Chief Counsel, then served as a law instructor at the Coast Guard Academy. After two years as an attorney at the U.S. Maritime Administration, she joined the staff of the former Committee on Merchant Marine and Fisheries, and served there as Minority Counsel from 1987 to 1995.
Commissioner Dye graduated from the University of North Carolina at Chapel Hill in 1974, and earned a law degree from the University of North Carolina at Chapel Hill in 1977.
Commissioner Dye participated in the 4th Annaul Mentoring and Networking Reception in 2014 hosted by CWB.