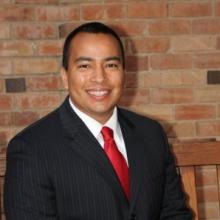 Councilman Daniel Valenzuela began his four-year term of office for the Phoenix City Council on Jan. 3, 2012. He proudly represents District 5, which includes west and central Phoenix. Daniel is committed to working with community leaders and his colleagues on the Council to make Phoenix an even better place to live.

He currently chairs the Downtown, Aviation and Redevelopment Subcommittee. He also serves as a member on four of the other six subcommittees which include: Neighborhoods, Housing and Development; Finance, Efficiency, Economy and Sustainability; and Parks, Arts, Transparency and Education.

Daniel has dedicated his entire life to public service. He currently is a special operations firefighter with a valley city and the former public information officer. Working closely with the local media, he has been able to educate the public about childhood drownings and much more. He also developed several programs to educate all ages--from youth to seniors--about water safety, and healthier lifestyles.

Daniel has become a leader in the local and national first responder community. He is an instructor for the Arizona Department of Emergency Management and director of the National Fire and Rescue Services Information Officer Network. He also has served as a fire science instructor at Glendale High School and the Maricopa Community Colleges District. He is the former president of the National Association of Hispanic Firefighters, representing nearly 30 chapters throughout the country.

Prior to serving on the City Council, Daniel volunteered his time as a member of the Maryvale Village Planning Committee. As an involved neighbor, he represented area residents to ensure proposed development was carried out in the best interest of his community. Daniel also has volunteered with several community organizations, including Americans Taking Care of Americans, the Labor's Community Service Agency and served on the 911 Memorial Commission.

Daniel represents the city of Phoenix on the board of Western Maricopa County Coalition (WESTMARC), which focuses on promoting economic development in the west valley; ASU West, higher education institution offering profession and liberal arts degree programs to nearly 9,000 students in northwest Phoenix; Arizona Emergency Medical Systems, an organization dedicated to improving emergency medical services for the Central Arizona Region; and BUILD Arizona, which ensures children enter school with the ability to read at grade level. He was recently named First Alternate on the METRO Board.

Phoenix, AZ
May 12 - 1:30 pm to 6:00 pm
This form needs Javascript to display, which your browser doesn't support. Sign up here instead