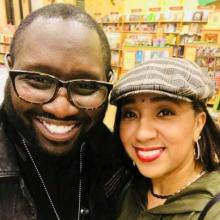 For the past two decades, Atlanta-based Benjamin—a.k.a. “Curtis B.”—has devoted himself to developing incentive programs to empower and educate urban youth. Born and raised in Cleveland, Ohio, he went on to minor in child psychology at Cleveland State University where he received a Bachelor of Arts degree.

Combining those two disciplines, he began creating community-based initiatives to introduce teen girls to the performing arts AND help them combat destructive issues such as bullying, date abuse and domestic violence.

After his own young daughter’s 2011 death from a brain tumor he says his work took on even deeper meaning. In 2014, along with his wife Debbie, Benjamin launched the off-shoot program Saving Our Cinderellas on Broadway in partnership with actress, singer and activist, Keke Palmer, from her acclaimed Rodgers & Hammerstein Broadway musical, “Cinderella”.

Since 2011, Saving Our Daughters creates the tools to get teen girls fired up to take the power away from negative issues of bullying, as celebrity supported art programs, educate girls beyond the borders of a traditional classroom.