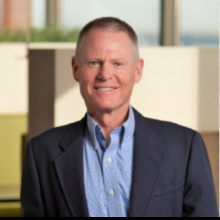 Dan Dye is the CEO of Ardent Mills, the independent joint venture of its parent companies --Cargill, Conagra Brands and CHS.Ardent Mills operates a network of 40+ community flour mills and bakery mix facilities along with a specialty bakery in the United States, Canada and Puerto Rico.It is a values-based organization committed to being a trusted partner delivering innovative and nutritious grain-based solutions with a brand promise of “Nourishing What’s Next.”

Prior to the formation of Ardent Mills, Dan held various merchandising and managerial positions since joining Cargill in 1981. In 2009, Dan was named president of Horizon Milling, a Cargill joint venture with CHS.  In this capacity Dan was responsible for the flour milling, mix and bakery operations of Horizon Milling in the U.S. and Canada, offering wheat and flour products and solutions for a wide range of ingredient applications.

Dan graduated from Bethel University in 1981 with a bachelor's degree in business administration and economics. He resides in Denver, Colo., with his wife, Alea. He has two adult children, Elise and Jordan. In his spare time, Dan spends as much time as he can with his family, especially his 2 young grandsons, and likes to run and hike.