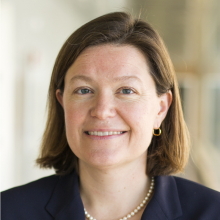 Dawn M. Tilbury received the B.S. degree in Electrical Engineering, summa cum laude, from the University of Minnesota in 1989, and the M.S. and Ph.D. degrees in Electrical Engineering and Computer Sciences from the University of California, Berkeley, in 1992 and 1994, respectively.  In 1995, she joined the Mechanical Engineering Department at the University of Michigan, Ann Arbor, where she is currently Professor, with a joint appointment as Professor of EECS. Her research interests lie broadly in the area of control systems, including applications to robotics and manufacturing systems.  She has published more than 150 articles in refereed journals and conference proceedings.  She was elected Fellow of the IEEE in 2008 and Fellow of the ASME in 2012, and is a Life Member of SWE.  Since June 2017, she has been the Assistant Director for Engineering at the National Science Foundation.

She won the EDUCOM Medal (jointly with Professor William Messner) for her work on the web-based Control Tutorials for Matlab.  An updated version was recently re-issued at http://ctms.engin.umich.edu.  She is co-author (with Joseph Hellerstein, Yixin Diao, and Sujay Parekh) of the textbook Feedback Control of Computing Systems.  She received an NSF CAREER award in 1999, and is the 2001 recipient of the Donald P. Eckman Award of the American Automatic Control Council. She is the 2012 recipient of the SWE Distinguished Engineering Educator Award, and the 2014 recipient of the Michael J. Rabins Leadership Award from the ASME Dynamic Systems and Control Division.

She was a member of the 2004-2005 class of the Defense Science Study Group (DSSG), and was a member of DARPA's Information Science and Technology Study Group (ISAT) from 2005–2008.   She has spent sabbatical leaves at the Institute for Industrial Technologies and Automation (ITIA-CNR) in Milan, Italy and the Department of Automatic Control in Lund, Sweden.  At the University of Michigan, she has taught courses in dynamic systems modeling, automatic control, robot kinematics and dynamics, and linear systems theory, and has advised more than 20 PhD students.

She was a member of the IEEE Control Systems Society Board of Governors from 2005–2008 and again from 2014–2016, and was a member of the ASME Dynamic Systems and Control Division Executive Committee from 2008–2013 (and was Chair of the Division from 2011–2012). She was Associate Editor of the IEEE Transactions on Automation Science and Engineering from 2008–2011, and a Senior Editor from 2012–2017. She was Program Chair for the 2012 American Control Conference and General Chair for the 2014 ACC.  From 2014–2017, she was the Chair of the Policy Committee for the International Federation of Automatic Control (IFAC), and she is currently a member of the IFAC Council.