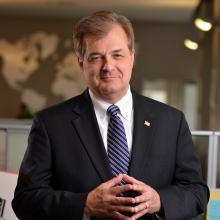 Don DePerro has served as President and CEO of the Columbus Chamber of Commerce since March 2016.

Don’s team has grown paid membership at the Columbus Chamber more than 25 percent in only two years. The Chamber team has also created new programming, such as Chamber Owner Circles, where small groups of business owners meet monthly in peer-to-peer mentoring sessions to resolve the issues of the day.

Don’s team has also expanded the Chamber’s role in education and workforce development and has hired veteran workforce executive Kelly Fuller to oversee a broad range of initiatives that connect existing workforce programming with the Chamber’s more than 1,600 members.

In his first year at the Chamber, the organization partnered with Cleveland’s Council of Smaller Enterprises (COSE) to launch a new health insurance plan for Chamber members; created a new Strategic Plan to guide the Columbus Chamber through the year 2020; and attracted four new managers who helped advance a clear direction for our Chamber.

Don previously served as president and publisher of Columbus Business First, the last position he held in a celebrated publishing career that spanned 35 years. As Columbus Chamber president and CEO, Don brings a notable list of professional achievements. He has been named the U.S. Small Business Administration’s Media Advocate of the Year for the state of Florida. He has received six American City Eagle Awards for Excellence–the highest honor awarded to that company’s associates–as both an editor and publisher. He also was named to the Hall of Fame in the School of Communications at the State University College of New York at Buffalo, Don’s alma mater.

In addition to his professional accomplishments, Don remains heavily involved in community initiatives. Don serves on the Federal Reserve Bank’s Columbus Business Advisory Council, the Workforce Development Board of Central Ohio, as well as serving or having served on the boards of the local American Cancer Society, Recreation Unlimited, Action for Children, The Capital Club, The Columbus Foundation’s Marketing Committee, and Leadership Columbus’ Board and Executive Committee. He also served as general chairman of the American Heart Association’s “Heart Walk,” and served as the chairman of the Mid-Ohio Food Bank’s largest fund-raiser for nearly two decades.

Don and his wife Lia have three children: a Buckeye, a Bobcat, and a Kentucky Wildcat, and live in Dublin, Ohio.