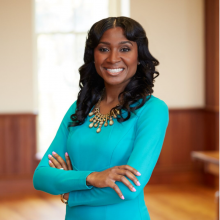 Fresh from her recent appointment as the Executive Vice President and Chief  Operating  Officer at Howard University, Dr. Tashni-Ann Dubroy, (formerly President of Shaw University), has been awarded Female President of the Year by the HBCU Digest. Tashni-Ann Dubroy most recently served as the 17th President of the “Mother of all Historically Black Universities in the South”, Shaw University. Appointed in August 2015 during the University’s sesquicentennial celebratory year, Dr. Dubroy’s administration positioned Shaw as a resource to the City of Raleigh through entrepreneurial innovation, civic presence and support for students and surrounding communities.

Dr. Dubroy’s philosophy of fiscal conservatism and institutional capacity-building made her a fast-rising star in the higher education community. In its first year, the Dubroy Administration effectively reversed six consecutive years of enrollment declines and yielded a 15 percent  increase of new and returning students in 2015. That same year, the administration closed a $4 million fundraising gap which included an institutional record $630,000 raised during Shaw’s annual homecoming weekend, and earned positive change in net assets to counteract a two-year loss – all of which earned her honors as 2017 CEO of the Year  in the  Triangle region. She was named to  the 40 Under 40: Excellence in Leadership list by the Triangle Business Journal. She has received numerous accolades from local philanthropic organizations.

Her path to the presidency was unconventional, but her leadership has been categorized as a fresh and needed vision for the sustainability of higher education in metropolitan settings. Dr. Dubroy began her career as a Research Scientist at BASF, the world's largest chemical company. She quickly ascended to the position of Global Technology Analyst, and after two years, was appointed to serve Chemical Procurement Manager, where she managed a strategic sourcing budget of $35 million.

Prior to joining Shaw University, she co-founded Tea and Honey Blends, a hair care company that manufactured and retailed natural hair care products, and co-owned downtown Raleigh’s Element Beauty Bar. Her entrepreneurial success has landed her on the pages of  Money  Magazine and Bloomberg’s BusinessWeek.

A nationally-recognized advocate for female participation in the sciences, Dr. Dubroy was recognized by Cosmopolitan Magazine, as a “Fun, Fearless Female” who is making waves in the science community as founder of the Brilliant & Beautiful Foundation. Dr. Dubroy also serves on the Executive Board of the Greater Raleigh Chamber of Commerce, the Downtown Raleigh Alliance and the Carolina Business Development Fund.

Dr. Dubroy earned her Ph.D. in Physical Organic Chemistry from North Carolina State University in 2007, and holds a Masters of Business Administration from Rutgers University in New Jersey. Prior to her executive appointment, the Shaw University alumna served as Special  Assistant to  the President, Chair of Shaw University’s Department of Natural Sciences and Mathematics, and as an associate professor of Chemistry.

She is married to Dale Dubroy and they have one daughter, Marli-Jolie.