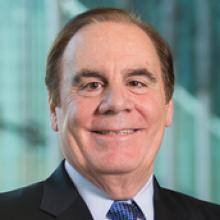 Fred M. DeGrandis is an experienced senior executive with 30+ years of healthcare experience and successful leadership in the areas of Hospital, Health System, physician group, and community and civic organizations.  He has served as an executive in all major health systems in greater Cleveland, and has extensive experience in the international operations. DeGrandis has and continues to serve as trustee, director and governance leader for many healthcare, civic, education and community organizations.

In April 2015, DeGrandis joined SMG as the Managing Director & Chief Administrative Officer of the Global Center for Health Innovation (GCHI).

DeGrandis has received recognition from numerous organizations for his extensive health care and community leadership.

He is a graduate of the University of Michigan and received his law degree from Cleveland State University’s John Marshall College of Law. DeGrandis is a lifelong resident of Cleveland.