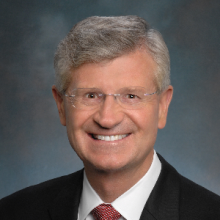 Gary L. Toebben is President & CEO of the Los Angeles Area Chamber of Commerce, the largest business association in Los Angeles County representing more than 1,600 member companies and serving the interests of more than 235,000 businesses across the Los Angeles region.

Since taking the helm of the L.A. Area Chamber in July 2006, Toebben has served on the Mayor’s L.A. Economy & Jobs Committee, the L.A. County Health Care Options Task Force and the City Council’s Business Retention & Attraction Task Force. He has championed local and state ballot initiatives on transportation and economic development and represented the Chamber as a co-sponsor of Proposition 11 (November 2008) to create a citizens commission to redistrict California after each census and Proposition 28 (June 2012) to create a 12-year term limit for all new members of the California Senate and Assembly.  He is highly involved in statewide business groups including the CalChamber and a coalition of regional economic development associations spanning the entire state.  Each year, Toebben co-leads the region’s largest consensus advocacy trip to Washington, D.C.
Prior to joining the L.A. Area Chamber, Toebben served as President of the Northern Kentucky Chamber of Commerce for seven years. Toebben began his chamber career in 1975 at the North Platte, Nebraska Chamber of Commerce, and from 1981 to 1999 he served as President of the Lawrence, Kansas Chamber of Commerce.
Toebben has served as Chairman of the Board of Directors of the American Chamber of Commerce Executives (ACCE) and is past chairman of Mobility 21, a seven county regional transportation advocacy group.  He is a graduate of the Center for Creative Leadership in Greensboro, North Carolina; Institute for Organization Management at the University of Colorado and the Academy for Organization management at Notre Dame University. Toebben is a past Chairman of the Board of Regents for the University of Colorado Institute for Organization Management, the Kansas Chamber of Commerce Executives, the Nebraska Chamber of Commerce Executives, the Kansas Industrial Developers Assn, the Western Nebraska United Chambers of Commerce and the Nebraska State Tourism Advisory Board.
Toebben holds a B.S. in mathematics from the University of Nebraska, Lincoln. He and his wife Janice, who is a senior vice president with US Bank, have four children ages 34-39 and seven grandchildren.
This form needs Javascript to display, which your browser doesn't support. Sign up here instead