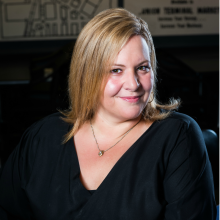 The jolly, larger-than-life personality and myriad scattershot interests of Gina Chersevani belie this renaissance woman’s ability to apply intense focus to any task at hand.  Whether she’s practically inventing a professional field from her passion for ultra-creative mixology, or securing DC’s only mobile liquor license for her 1967 Airstream bar, or creating a popular hipster, “Jewish style” deli inspired by her mother’s beloved childhood soda shop, Chersevani dreams big dreams, and wills them into being.

Chersevani, a native New Yorker, was born attuned to food. Her father was a Northern Italian chef who was in the restaurant business for fifty years, and whose legacy of recipes she treasures.  Growing up, her diet was dominated by the family’s Italian heritage, and heavily influenced by the ubiquitous Jewish neighborhood delicatessens; Friday nights, dinner was Chinese take-out. “Every Thanksgiving, we’d have a turkey – but it was just for show, a centerpiece,” she recalls. “The real feast was all the sides, not one of which the Pilgrims would have recognized, by taste, anyway: eggplant parmesan, sautéed garlic brussels sprouts, zucchini bread, a garlicky pumpkin dish, string beans sautéed with pignoli nuts, giardiniera cauliflower salad, and garlic mashed potatoes enhanced with large amounts of parmesan, prosciutto, and salami. I think maybe the turkey ended up in sandwiches later in the week – we didn’t want it to seem wasteful.”

Thanks to her early training, Chersevani has been able to make ravioli like a pro for as long as she can remember -- as well as mozzarella, meatballs, sausage, and a mean marinara sauce. She worked in a bagel shop through high school. At the University of Maryland, she majored in psychology and fine arts, two fields that would lend themselves naturally to her bartending sideline, which she took on to avoid ever having to work in another bagel shop. She also spent many hours in the chemistry lab; taught art theory; and embarked on her voracious reading habit – her conversation is liberally sprinkled with references to James Joyce and Mark Twain.

After graduating, she landed a martini-making gig in the District. Quickly learning the ropes and earning her chops, she found her skills in high demand around town. Jamie Leeds asked Chersevani to design her beverage program at 15 Ria. The imaginative cocktail menu she developed for Poste Moderne Brasserie at the Hotel Monaco made her reputation. As master mixologist for Rasika, the acclaimed modern Indian restaurant, she was introduced to exotic ingredients like saffron, cloves, and lotus.  She served as bar chef for the gastropub EatBar, and the fine dining restaurant Tallula; she teamed up with chef Peter Smith at PS7’s, where they became industry leaders on cocktail-and-food pairings; she worked as a beverage consultant for numerous local restaurants, and as a brand ambassador for distilleries eager to experience her rock-star mixology. Along the way, she earned just about every award and accolade her profession has to offer, including a Rising Star Award from the acclaimed StarChefs, and the first-ever RAMW “RAMMY” for best Beverage/Mixology program. Once the dominant champion of the local and national cocktail competition circuits, she stepped aside to let the next generation shine.

Channeling her mother’s childhood memories of “Norma’s,” a classic pharmacy-soda shop at the intersection of Buffalo Avenue and Bergen Street in the Weeksville neighborhood of Brooklyn, she set about creating her own version of an authentic soda shop: Buffalo & Bergen opened in 2012, in 330 square feet at the heart of the popular market. She sourced a reconditioned 1939 Sebastian Fountain from a vintage Woolworth’s counter – “My Cadillac!” she calls it – a gleaming two-ton apparatus that she lovingly polishes and keeps filled with an array of artisanal syrups, from Bourbon Vanilla Bean to Spiced Chocolate to Pineapple-Cardamom. Along with classic egg creams, floats, and sodas, just like the soda shop of her mother’s memories, Chersevani – the inveterate mixologist – concocts fanciful soda-fountain cocktails like the Deeply Rooted, made with Avua Cachaca Amburano, Luxardo Maraschino Liqueur, Lime, and Gentian Root Soda; and the Into the Sun, on-tap and featuring Macchu Pisco, Aji Amarillo, Ginger, Pineapple, Lime, and Soda. Buffalo & Bergen serves delectable housemade knishes; for New York-New Jersey diehards, the “Turnpike” side sauce option offers a generous dousing of garlic-parsley butter. And, yes, the shop serves bagels; but not just any bagels: Buffalo & Bergen imports its sought-after stock made with the quintessential ingredient, New York water, baking them fresh and ready for a slathering of cream cheese, house-cured gravlax, or to become the foundation of a hearty sandwich; in the case of the Lox’d & Loaded, Chersevani’s award-winning Bloody Mary is actually garnished with an everything bagel topped with lox, cream cheese, capers, and red onion! In 2019, she’ll open a second Buffalo & Bergen location on Capitol Hill. With more space, Chersevani will fulfill her dream of recreating the full-service delicatessen-dinette of her own childhood, where patrons can build their own meals, from falafel to chicken cutlet parmesan to rice pudding.

Chersevani’s participation in pro-bono charitable projects amounts to what would be a full-time career for most. Some of the organizations and events that benefit from her generous energy include The March of Dimes; the American Heart Association; Share Our Strength [Taste of the Nation Mixology Chair]; The James Beard Foundation Awards; Capital Area Food Bank [longtime Food Fight Mixology Chair]; The Humane Society of Washington, DC; Mardi Gras Extravaganza fundraiser; and Tales of the Cocktail.

One of the most satisfying aspects of Chersevani’s career is sharing her expertise with others. “There’s no joy in keeping it secret,” she states. She remains a sought-after mixology mentor, a judge in national cocktail competitions, and has long been an industry leader and educator in the use of local and organic farm fresh products. In her bountiful backyard garden, she grows all her own herbs and floral garnishes. Last Labor Day, she gave her Buffalo & Bergen staff a day off, but had them join her before dawn for a day-long fishing excursion on the Chesapeake. “We cure our own gravlax, and go through roughly eighty pounds of salmon a week,” she explains. “It’s important to respect the product – and to understand why.”
On top of this constant creativity, Chersevani and her husband are raising two little girls, born within a year and three days of each other. “Like everything else in my life: I love a good challenge!” she laughs.