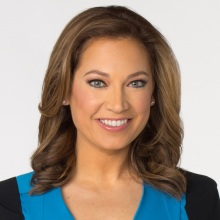 Ginger Zee is the chief meteorologist at ABC News. You see her covering the nation’s weather headlines on Good Morning America and across all ABC News broadcasts and digital platforms. She also hosts an ABC News original digital series, Food Forecast, focused on climate and its impact on agriculture.

Ginger has covered almost every major weather event and dozens of historic storms for the past fifteen years—from Hurricane Katrina to Hurricane Sandy; from the Colorado floods and wildfires to the aftermath of tornadoes all over the nation, but most memorably those in Moore and El Reno, Oklahoma; and from blizzards in Boston to record-breaking heat in Death Valley. She not only shares her passion for meteorology but, more important, presents the human side of these storms.

Having storm-chased since college, Ginger has a genuine passion for the atmosphere and a dedication to getting young people interested in science. She lends her voice to Dr. Zephyr Skye, the storm-chasing alien of Disney Junior’s hit show Miles from Tomorrowland. Additionally, Ginger and her husband, Ben Aaron, star in Renovation Realities: Ben and Ginger on DIY Network.

The Emmy Award–winning meteorologist attended Valparaiso University and holds a Bachelor of Science degree in meteorology. She served as an adjunct professor at her alma mater from 2008 to 2011. Ginger also holds the Certified Broadcast Meteorologist seal from the American Meteorological Society.

She resides in New York City with her husband and son.