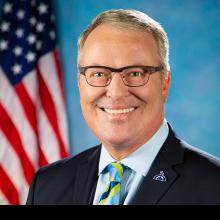 Buddy Dyer has served as Mayor of the City of Orlando since 2003, and from his first day in office, he has worked tirelessly to advance the community’s shared vision for Orlando as America’s 21st Century City.

Under Mayor Dyer’s leadership and through strategic investments, Orlando is one of the nation’s fastest-growing cities and is the most visited destination in the country, hosting more than 72 million visitors each year. Mayor Dyer has defined Orlando as America’s new home for inclusiveness, opportunity and quality of life, with a strong focus on innovation, transportation, sustainability and government efficiency.

Committed to Inclusiveness
Mayor Dyer helped the community unite and heal following the June 12, 2016 Pulse tragedy that took the lives of 49 people and injured more than 50, vowing that Orlando would not be defined by one hateful act, but instead by responding with love and compassion. The unity was on display in the hours after the tragedy when residents waited for hours to donate blood, and later at vigils and memorials and as millions of dollars were raised to support victims’ families and survivors through the OneOrlando Fund.

Throughout his tenure as Mayor, he has ensured that Orlando is a city that embraces diversity, promotes fairness and equality and is a welcoming, multicultural community. Following Hurricane Maria, he helped lead the region’s efforts to provide assistance to Puerto Rico and the U.S. Virgin Islands and also welcome newcomers to Orlando. In 2015, Mayor Dyer presided at the historic Vowed and Proud wedding ceremony at City Hall when 44 same-sex couples were married.

Orlando’s longest-serving mayor, Mayor Dyer is dedicated to celebrating the community’s diversity throughout the year at annual cultural events, and also through workshops to foster ongoing engagement and conversation between residents and the City to further a culture of acceptability and understanding.

Creating a City of Opportunity
Since his first day in office, Mayor Dyer has strived to increase cooperation and partnership between Central Florida’s many governments, its business and civic communities and its residents. The result of this effort is a new era of collaboration that has paved the way for a series of remarkable, transformational accomplishments for greater Orlando in a very short period of time and has set the city on course for a more prosperous future.

That future includes a new University of Central Florida-Valencia College campus in Downtown Orlando, which will open in 2019, anchoring the Creative Village innovation cluster and benefiting the entire region, bringing more than 7,500 students and a more than $200 million economic impact each year. The campus will also help young people, including those in the City’s successful youth programs, connect education to opportunity.

The accomplishments also include the opening of three community venues – the Amway Center, the Dr. Phillips Center for the Performing Arts and Camping World Stadium. The venues, which have brought world-class events to Central Florida, even more international visitors to the region and enhanced the quality of life for residents, were part of Mayor Dyer’s engineering of one of the most remarkable downtown resurgences of anywhere in the country.

Mayor Dyer has served as one of the region’s leading voices on ending homelessness, guiding the collaboration among jurisdictions, service providers and community groups. Veteran homelessness has been essentially eliminated and a 2016 point-in-time census identified a one-year 23.6 percent decrease in the number of homeless individuals in the region.

Developing a Destination for Innovation
Mayor Dyer has shaped Orlando into a desirable place to live, work, learn and play. Orlando continues to add jobs at one of the highest rates of any metropolitan area in the country and Forbes ranked Orlando No. 3 nationally as the best place to buy real estate.

Mayor Dyer is leading the efforts to diversify Central Florida’s economy and create a new breed of high-tech, high-wage careers for residents in cutting-edge industries such as digital media, life sciences and biotechnology, modeling, simulation and training and aviation and aerospace.

Innovation is on display at the Lake Nona Medical City, which is home to some of the nation’s leading hospitals, universities, research institutions and health and science companies. A growing destination for startups and young entrepreneurs, Downtown Orlando’s tech scene is thriving.

Keeping Orlando Moving and Green
Under Orlando’s strong-mayor form of government, Mayor Dyer serves as the City’s chief executive and also helps govern and oversee the operations and growth of its city-owned utility, OUC, and the Orlando International and Executive Airports.

Mayor Dyer is an advocate for the expansion of public transit and for creating an environmentally sustainable city. Successes under Mayor Dyer’s leadership include SunRail, Central Florida’s first commuter rail system which launched in 2014, the introduction of bike share and an 140 percent increase in bike lane mileage since 2003.

Orlando has worked to become one of the most sustainable cities in the country. Through recycling, composting, energy efficiency and the planting of thousands of trees, the City is conserving more and wasting less in order to create a better future for generations to come.

Serving Efficiently
Mayor Dyer’s commitment to bolstering police protection helped bring about the most dramatic reduction in crime in Orlando history. This focus on safety has also helped make the Orlando Fire Department one of the elite departments in the entire country with international accreditation.

Under Mayor Dyer’s leadership, the City is creating a Digital City Hall which allows business owners, residents and visitors to access City services and Orlando Police Department data via the internet.

A Central Florida Native
Mayor Dyer was born in Orlando and raised in nearby Kissimmee.

Prior to being Mayor, he served for a decade in the Florida Senate. His colleagues elected him as their Democratic Senate Leader, a position he held for three years. Mayor Dyer earned his undergraduate degree in Civil Engineering from Brown University and his Juris Doctorate degree from the University of Florida College of Law. Before he chose to serve in public office, Mayor Dyer worked as an environmental engineer.