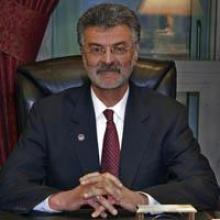 Mayor of Cleveland
Frank G. Jackson, Mayor, City of Cleveland
Cleveland’s 56th Mayor, Frank G. Jackson, took office January 2, 2006. He has since been re-elected twice - in 2009 and 2013. As Mayor, Jackson is focused on ensuring that the city offers an excellent quality of life for every resident, business and visitor and is addressing every aspect of City operations and policy to guarantee that he reaches that goal, including:
City Finances and Operations
Quality of Life
Public Safety
Development
Mayor Jackson is a Cleveland Public Schools graduate and Army veteran. He earned an associate’s degree from Cuyahoga Community College and his bachelor’s degree, master’s degree, and law degree from Cleveland State University. He began his public service career as an Assistant City Prosecutor in the Cleveland Municipal Court Clerk’s Office. From 1990 through 2005, Jackson represented Cleveland’s 5th Ward on Cleveland City Council. From 2002-2005, Jackson also served as President of Cleveland City. Council