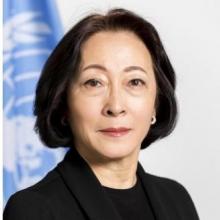 Ms. Mizutori served for twenty-seven years in various capacities in the Japanese Ministry of Foreign Affairs. Prior to joining the UN, Ms. Mizutori was Executive Director of the Sainsbury Institute for the Study of Japanese Arts and Cultures, University of East Anglia, UK, since 2011.

Ms. Mizutori graduated in law from Hitotsubashi University, Tokyo and obtained a Diploma in International Studies from the Diplomatic School of Spain.