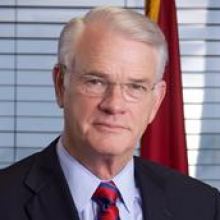 Mayor of Shelby County
Mayor Mark H. Luttrell, Jr., was born in Jackson, Tennessee and spent his early years in Bells, Tennessee. As a teenager, his family moved to Memphis where he graduated from Bartlett High School, earned a B.A. from Union University, and received a Masters in Public Administration from the University of Memphis.
His long public service career began with the Shelby County Penal Farm, progressed to his being warden over several federal prisons, and continued with his election as Sheriff of Shelby County in 2002. During his tenure he earned several awards, personally and for the various institutions under his management, for outstanding leadership over major improvements to the county jail system and accreditation.
In August 2010, Mark was elected Shelby County Mayor.  He has since led several successful initiatives in economic development, such as creating the Economic Development Growth Engine (EDGE) for Memphis and Shelby County, while also emphasizing expanded public awareness of healthy living through the Healthy Shelby program. Mayor Luttrell aims to make Shelby County become a national benchmark for effective and efficient government by aligning initiatives within his four-point vision: budget discipline, safe communities, public health, and jobs.
Mayor Luttrell juggles many leadership roles within the community by serving on various professional boards and committees: National Association of Counties Board of Directors, Memphis-Shelby Crime Commission, and University of Memphis Arts and Sciences Advisory Council. In addition to being a Leadership Memphis graduate, Mayor Luttrell is a distinguished recipient of the Outstanding Alumni Award of the University of Memphis, College of Arts and Sciences.
He is a member of Second Baptist Church in Memphis. He and his wife, Pat, have three children and six grandchildren.