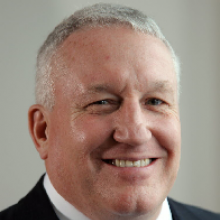 Mayor of Lakewood
Mike in Lakewood
Mike and his wife, Wendy, began their life together in a double on Cook Avenue in Lakewood, followed by a single home on Arthur Avenue as their family began to expand. They have three children: Amy, Ted, and Barbara. They now reside on Wilbert Road. The Mayor is a lifelong Lakewood resident and is a product of Lakewood City Schools, as are all of his children.
Public Leadership
Mayor Mike Summers was appointed by City Council on January 2, 2011 to fill the unexpired term of Ed Fitzgerald who had been elected to the post of Cuyahoga County Executive. With your help, Mayor Summers was elected to a full term in November of 2011. As mayor, Mike Summers has served on the board of directors for the Northeast Ohio Areawide Coordinating Agency (NOACA) and an active member of the First Suburbs Consortium, a group of 19 inner-ring Cleveland suburbs.
Prior to becoming Mayor, Mike Summers was elected to Lakewood City Council in 2007 to represent Ward 3. He also served eight years on the Lakewood Board of Education, including service as President in 1999 and 2003. In addition to his public service, Summers also has a long history as a community volunteer. He was appointed by the Cuyahoga County Commissioners in 2000 to serve on the County Workforce Investment Board. He chaired the Grow Lakewood Strategy Taskforce (2005) and the Structural Balance Finance Task Force (2007). Mayor Summers was also part of the Leadership Cleveland (class of 2004), which trains and encourages civic involvement in the Greater Cleveland area.
Business Leadership
Mike Summers owned, and was president of, Summers Rubber Company for 32 years. Summers Rubber Company is an industrial distribution company specializing in hose, fittings, and sealing products for the durable goods manufacturing, chemical, and construction markets. Under the leadership of Mike Summers, Summers Rubber now has more than 60 employees and 8 branch locations.
His professional accomplishments include service as President of the Westside Industrial Retention Network (WIRE-Net), a consortium of manufacturing companies dedicated to preserving industrial jobs on Cleveland’s Westside and President of the National Association of Hose and Accessories Distributors (NAHAD). He served as a Board Member of the Cleveland Growth Association and Co- Chaired its Jobs and Workforce Intitiative. He serves as a member of the Board of Directors of First Federal Savings and Loan Association of Lakewood. He was appointed by Governor Taft to serve as Chairman of Ohio’s Workforce Policy Board from 1999 to 2003.
Education
Mike Summers is a graduate of Lakewood High School, Class of 1972. He earned an MBA from Northwestern University’s Kellogg School of Management, and a B.A. from Wittenberg University, Springfield, Ohio.
Awards and Recognition
Mayor Summers is the recipient of Wittenberg University’s Distinguished Alumni Citation, and was inducted into the Lakewood High School Alumni Hall of Fame.