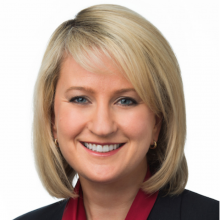 Jennifer Aument oversees Transurban’s business in the United States and Canada, where she is responsible for the development, financing, construction and operations of major toll road infrastructure. She also serves on the global leadership team for the $26 billion international toll road owner and operator.

Jennifer and her team at Transurban were among those who pioneered the use of public-private partnerships for major transportation infrastructure in the United States and were the first to use a number of innovative financing and technology strategies in the development of major toll road projects, including the 495, 95 and 395 Express Lanes in Northern Virginia. Under Jennifer’s tenure, these projects have won multiple industry awards for financing, innovation, safety and technology from groups such as the American Road & Transportation Builders Association, Engineering News-Record, Intelligent Transportation Society of America and the International Bridge, Tunnel and Turnpike Association.

As a leader in the transportation industry, Jennifer has advised state governments across the country on issues related to transport policy, innovative finance and public-private partnerships, and currently serves on advisory boards for the Eno Center for Transportation, the American Road & Transportation Builders Association, the Highway Users Alliance and George Mason University. She was recently named among the “Outstanding Women in the Building Industry” and Commercial Real Estate Women’s “Woman of Impact.”

Jennifer has been appointed to key positions by both Republican and Democratic governors, including commissioner and executive committee member for the Virginia Port Authority – one of the largest shipping enterprises in the United States. Jennifer has also served in number of community leadership roles, including as chairman of the Northern Virginia Chamber of Commerce and a member of the board of directors for one of the region’s largest non-profit organizations, Northern Virginia Family Services.

Prior to joining Transurban in 2006, Jennifer worked for Bechtel Infrastructure to develop the Washington Metrorail Silver Line. She began her career working in the West Virginia state legislature and went on to work as a public affairs and policy advisor to energy, infrastructure and financial services companies, including major multinational corporations such as HSBC, Suez Energy and General Motors.

She holds a Masters of Business Administration from The George Washington University and a bachelor’s degree in journalism and political science from West Virginia University.