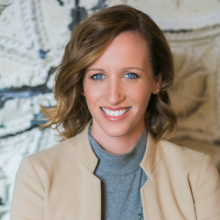 Co-Founder, Mine The Gap

Jessica N. Grounds has devoted her life to empowering women to become leaders in public life and is an internationally recognized thought-leader in arena of women’s leadership.

Jessica is the Co-Founder of Mine the Gap, a company that equips leaders, industries, and organizations with the strategy and tools needed to create and sustain gender-inclusive work environments. Mine the Gap advises and works with major companies, organizations, and government agencies including Amazon, National Geographic, Facebook, PG&E, and Georgetown University, along with influential women’s organizations in the United States and globally. In her work over the years, she has garned significant private sector investment from companies including: Walmart, Lockheed Martin, Deloitte, and Google.

She is the Co-Founder and former Executive Director of Running Start, an organization that trains young women to run for elected office. She led Women Under Forty Political Action Committee (WUFPAC) as president, and served on the Board of Directors for fourteen years. She has advised and consulted hundreds of political candidates and organizations including many of the youngest women Members of Congress. Leading up to the 2016 presidential election, she served as the Director of Women Ready for Hillary.

Jessica routinely lectures globally about the importance of advancing women’s equity and the barriers to women’s leadership. She has extensive experience internationally working with the U.S. Department of State and international NGO’s.

Jessica holds Masters in Leadership from the McDonough School of Business at Georgetown University and a graduate certificate in Women, Policy, and Political Leadership from the Women & Politics Institute at American University. She has published cutting-edge research on women’s leadership in Congress and the private sector. Jessica and her work have been profiled in Roll Call, The Hill, NPR, ELLE, Mercury Times, Glamour, National Journal, Washington Post, Politico, Georgetown Business Magazine, Marie Claire, Spike the Watercooler, The Muse, Sage publications, and Forbes.

In 2018, Jessica was named a “40 Under 40” recepient by the American Association of Political Consultants. In 2016, Marie Claire recognized her in their article: The New Guard: America’s 50 Most Influential Women. Jessica grew up in San Diego, California, and graduated with a Bachelor of Arts in Political Science from Pepperdine University. She has lived in Washington, DC since 2003.