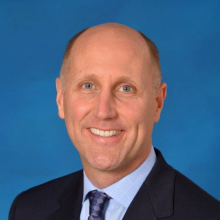 John Carmichael is President of Nestlé Pizza, part of Nestlé USA based in the Cleveland suburb of Solon, Ohio. Nestlé Pizza brands include DiGiorno®, Tombstone®, California Pizza Kitchen® and Jack’s®. In this role John is responsible for brand strategy, consumer marketing efforts and business profit and loss.

John began his Nestlé career in 1995 as a Marketing Associate within the Nestlé PetCare Division. In 1997, John joined the Nestlé S.A. Operations Improvement Team, the Nestlé S.A. global factory and operations improvement arm, which improves the effectiveness and efficiency of its value chain worldwide.

Through 2004, he held Marketing roles with Friskies PetCare in Glendale, CA and then with Nestlé Purina Pet Care in St. Louis, MO, culminating as Director of Marketing on Beneful® and Mighty Dog®. John was a key leader in the integration of the Nestlé and Ralston Purina Pet Food businesses, moving the Friskies business from Glendale, CA to St. Louis, MO and creating the world’s largest pet food company and the largest Nestle product category in the U.S.

In 2010 he was named Vice President of Marketing for DREYER’S® Grand Ice Cream, where he developed the portfolio plan and marketing roadmap that we still use today. He was tapped as Deputy for North America for Nestlé S.A. in 2011 and relocated to Vevey, Switzerland. In this role, John served as primary conduit for the Nestlé businesses in the U.S., Canada and Mexico and led zone initiatives on Pet Food, Frozen Food, Coffee, Ice Cream and the functions of Marketing and Sales.

He was promoted to his current position in 2013.

John obtained a Bachelor of Arts degree in Political Science and a Master of Business Administration degree from the University of California, Los Angeles (UCLA).